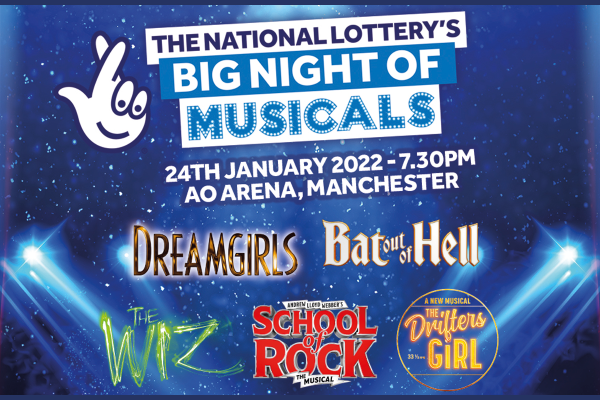 The joys of BBC’s iplayer mean that for February you can catch up on the veritable feast of musical theatre treats that the BBC has broadcast recently. The biggest jewel in this crown for me has to be the National Lottery Live’s Big Night Of Musicals, hosted by Jason Manford.

Recorded in front of a massive 13,000 audience at Manchester’s AO Arena, Manford opened with his own effortless, pleasing mash-up of Razzle Dazzle and All That Jazz from Chicago. The night provided 90 minutes of hit after hit, from the high-octane One Night Only/Listen from Dreamgirls to Gotta Last Forever from Back To The Future.

Not one but three Disney shows were offered up: Lion King, Beauty and the Beast and Frozen.The latter’s duet I Can’t Lose You reminded me constantly of Wicked, and the uplifting He Lives In You as well as the title song from B and B were all brilliant. And all three casts united for a stirring Let It Go finale. Watch it here on iPlayer.

The overall impression of the night was a celebration of the diversity of our theatre talent,  and there was also an emphasis on how the Lottery helps deaf and disabled performers get on in the business. One outstanding joy in this array of diverse talent was the inclusion of Ease On Down The Road from the tiny Hope Mill Theatre Manchester’s recent production of The Wiz, with its Black take on the Oz story. Hope Mill seats 100 so for the performers to pitch up and perform alongside the big-budget West End and touring companies was a sight to behold. They were outstanding. And surely there’s a West End possibility for the show. I hope so.

Sam Tutty shows why he’s such a wow in the offbeat musical Dear Evan Hansen, with his soulful You Are Not Alone, contrasted sharply with the androgynous punk energy of Bat Out Of Hell. If you imagine Matilda on acid, then you’ve got School Of Rock with its startling array of very young talent. And Chelsea Halfpenny showed why you shouldn’t miss Waitress on tour when she stunned with She Used To be Mine – look out for Waitress at Brighton’s Theatre Royal in July.

Beverley Knight gave her heart and soul to the new musical the Drifters Girl, and Waitress and Greatest Showman star Keala Settle with David Bedella were deliciously up-beat, electrifying and fiery in an excerpt from & Juliet. Altogether a stunning night that reminds us why we go and share our dreams in the dark warmth of our local theatres.

The 2nd blockbuster offering was BBC Four’s 2009 Proms tribute to MGM film musicals under the brilliant direction of John Wilson and his massive hand-picked orchestra. Wilson’s great talent is his ability to re-construct often lost orchestrations, with a swinging dance band at the centre of his players. The Maida Vale Singers gave us a jaunty Trolley Song intro to the magic that is Kim Criswell, with her full-throttle rendition of Garland’s classic. In Over The Rainbow she exuded fragility and innocence in a remarkable version. Watch on iPlayer here:

Curtis Stigers produced a gentle, sweet and laid-back Heather On The Hill, overlaying a rich, lush orchestral sound. Sarah Fox gave a full-voiced operatic tone to Wonderful Wonderful Day from Seven Brides For Seven Brothers, and her haunting duet with opera Royalty Sir Thomas Allen of Stranger In Paradise was followed by his emotional More Than You Know from Hit The Deck.

Kim Criswell roared back with I’ve Got Rhythm from Girl Crazy, raunchy, jazzy – right up her street. She holds onto a note like it’s her best friend whom she cant let go of.

Stigers crooned his way through Our Love Is Here To Stay and Kim made us happy with Get Happy, full of sass and joy. Seth MacFarlane ( yes he of Famly Guy fame) joined Kim for the witty laid-back Who Wants To Be a Millionaire and then he sauntered through the tender You’re Wonderful and joined by Curtis he cruised through What A Swell Party – all three songs from High Society. And on it went with more great hits from the golden age of movie musicals, including a rather deflated non-dancing version of Singin’ In The Rain. But they brought down the figurative Royal Albert Hall curtain with Broadway Melody and Broadway Rhythm. What a great night!

Next time join me for tunes from Petula Clark and  Elaine Page and revelations from Lord Lloyd Webber. Look out for it soon.