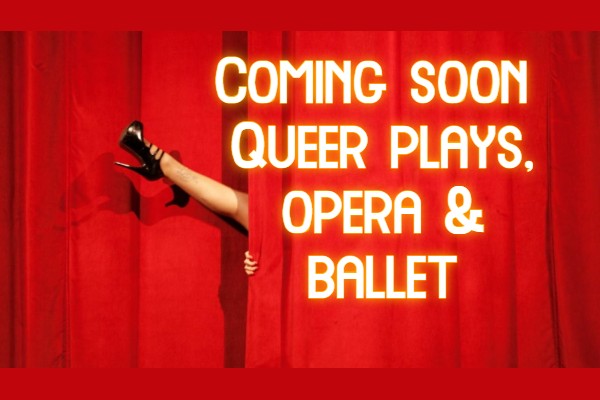 In the wake of the sudden closure of LGBTQ+ theatre Above The Stag, there’s news of a wide range of queer shows to come in Brighton and London.

After 10 years of married life Tom and Tim decide to spice up their sex life by booking an evening in a dungeon with a gorgeous male escort. Meanwhile crime-busting superhero The Stallion and his sidekick Butterfly have been lured to the secret lair of their arch-Nemesis Villanor. It sounds a queer hoot – tickets at riversidstudios.co.uk

Homo Promos present the world premiere of 1936:Fishing – a one-act chamber opera with story/libretto by Peter Scott-Presland and music by Robert Ely. A shy and lonely teenage boy, an old man with a secret, and a protective and suspicious mother all collide. Can catastrophe be averted? It’s billed as a kind of Death In Venice turned on its head, from the boy’s point of view.

It’s part of an epic history cycle: a Gay Century and the first part to receive a full performance. Composer Ely, sacked by the British Army for being gay, is now a powerful campaigner for queer service personnel. The creative team behind the show are all veterans of the 1990s Gay Rights movement. It runs September 4 – 6 at St Anne’s Church, Soho, September 9 at All Saints Hatcham Community Centre, Lewisham and September 10 at the Tower Theatre in London. Tickets homopromos.org

Les Ballets Trockadero de Monte Carlo are the outrageously unforgettable all-male ballet company better known as The Trocks. They started life in 1974 on the New York downtown drag circuit and have achieved worldwide fame.  They’re back at Brighton Dome for the first time in 7 years on 23/4 September. You can even join a workshop to learn their famous hilarious but moving dying swan routine. Don’t miss them. They are utterly breathtaking. Tickets at brightondome.org

Brighton-based choreographer Mark Smith is involved again in the marvellous production of The Color Purple – The Musical as it starts its national tour. I first saw it online in spring 2021 beamed from Leicester’s Curve theatre. Now more audiences can enjoy its wide-ranging storyline with its central exposition of a long-term lesbian relationship, and its coming of age themes and so much more. It’s an uplifting beautifully sung and danced piece of theatre. Tour dates include Plymouth, Northampton, Salford, Cardiff, Southampton and Norwich. Check ticketmaster.com

And finally in this selection, the wonderfully inventive Michael Conley brings his conflicted creation to the cabaret stage in his The Fabulist Fox Sister – A Musical Lie, for one night only at the Crazy Coqs in London on November 23. It’s another show I saw online in lockdown and it’s a deliciously dark tale about Kate Fox, the woman credited with inventing both seances and spiritualism.

Next time more queer opera, Daddy issues and the benefits of disabled sex. Look out for it soon in Scene.