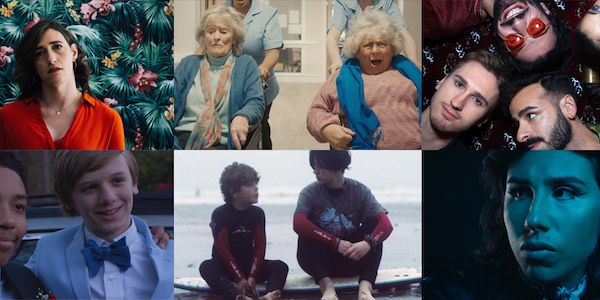 The internationally-acclaimed Iris Prize LGBTQ+ film festival is back at Brighton Fringe with three very contrasting programmes of movies to watch down on the seafront.

At the launch event, Iris boss Berwyn Rowlands told Scene: “Since the pandemic we’ve revalued our lives and it’s great to be back sharing LGBTQ+ stories.

“We’re very diverse and I look forward to the day that, for instance, in cop stories on TV the character’s sexuality is incidental. Our next phase, guided by our new chairman, Tom Abell of Peccadillo Pictures, will be worth looking forward to. What we do is quite lonely sometimes.”

Hove-based Channel 4 executive Tim Highsted said: “I’m struck by the community of LGBTQ+ film-makers at Iris. Clearly they have a talent and passion.

“What keeps coming through is the extraordinary array of talent Iris promotes.”

All 4 is once again showing the best of the British short films from Iris in an ongoing partnership. Let’s hope none of this ground-breaking work is jeopardised by the planned sale of the channel.

There’s another two weeks to catch the three Iris programmes at the Fringe. They are: a series of animated short films from the last 15 years; the best of Iris 2021, which includes the double-award winning Baba, and a selection of trans stories. I sampled the last of these programmes and here are my thoughts:

POP is an intriguing and dark story of a young trans boy coming to terms with his sexual identity and his connection to a recently-released prisoner, played with great grittiness by TV actor Stephen Graham.

God’s Daughter Dances deals with a post-op woman who performs regularly as a dancer in a Korean night club but whose future is turned upside down when she is called for medical examination before being conscripted as a man into the military. It’s a stark story of transphobia, bigotry, human frailty, but also resilience and defiance. Beautifully filmed and acted.

Birthday Boy centres on a trans schoolboy Alex, whose secret life is talking about the games he invents and having a secret male admirer online. Alexandra, as everyone calls him, is at an all-girls private school and subjected to ridicule, physical violence and hatred. But ultimately it’s a story of hope and positivity as the online correspondent is someone much closer to Alex than he thought.

The three programmes run until June 4 at the Electric Arcade during Brighton Fringe. Programme times and tickets HERE