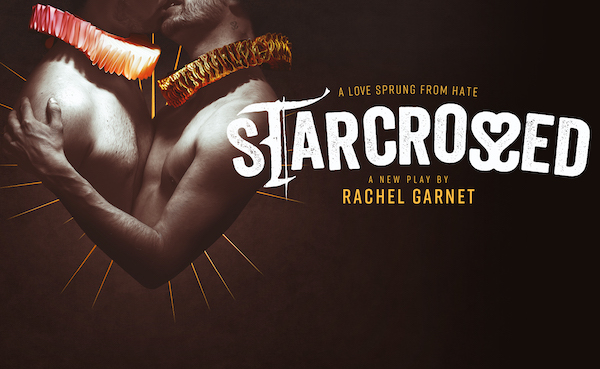 Shakespeare’s Romeo And Juliet has stood the test of over four centuries and been turned into dozens of operas, ballets, films and musicals, so it’s maybe not surprising that now we are to get a queer version of the doomed lovers.

But it’s not what you might think. Rachel Garnet’s version – seen Off-Broadway and in Washington DC, is a tale of sworn enemies and secret lovers – but it’s not R & J. This version, called Starcrossed, centres on two important but more minor characters in the Bard’s play – the sensual, headstrong Mercutio and the fiery sword fighter Tybalt.

Mercutio is a relative of the all-powerful Prince who rules Verona, and friend to Romeo. Tybalt is nephew to Lady Capulet – Juliet’s mother. The only other thing you need to know from the original is that both men have a sudden death in the middle of the play, caused directly or indirectly by Romeo.

So I was intrigued to talk to Connor Delves and Tommy Sim’aan – Mercutio and Tybalt respectively in this production, which opens at Wiltons Music Hall in London on June 1.

Connor is an Australian who moved to New York to study drama aged 18. His first big break was playing in Daniel’s Husband – a drama about the ups and downs of a gay marriage, which had a successful Off-Broadway run. And it got Connor his passport to more work – an Equity card. What’s remarkable is that, called to fill in, he learned his role overnight and was on stage within 48 hours.

And it’s not Connor’s UK debut- he toured the country aged 14, including Cornwall, but it is his professional London debut. Talking of his role as Mercutio, he told me: “Most people know him from the original and our script is drawn from that. He’s sexy, fluid – a fun-lover who flaunts his sexuality around town.

“He enjoys games and showmanship. He’s a carefree spirit, always on the edge and he likes the thrill of it. He’s open to anything – sleeping with women and men, he tells us – it’s not an issue for him. His sexuality isn’t a problem – he’s attracted to anything and anyone. he has a lust for life and then he falls in love with another man – Tybalt. He’s searched for love and now he finds it.”

This is Connor’s second run-in with the part – he played Mercutio in New York and Washington, but in London it’s a different director, cast and crew. “I’m treating it as completely new – it’s got expanded dialogue and there’s always more to find in a part. It’s a great opportunity to explore it with new people and new ideas.”

Asked the vexed question of whether you need to be a gay actor to play a gay part, he said: “It’s an issue that’s specific to each play: it’s a spectrum where people sit sexually – but absolutely I believe some roles should be played by queer actors but with others it depends on the context of the play.

“But our personal experiences always inform the characters we play. Auditioning is a safe space for queer actors now, but it’s not normalised yet for queer, black or disabled performers. We can all be a bit nicer to people along the way.”

Asked what he wanted the audience to take away from the play, he said: “The vulnerability of love – so people say yes, that’s me or my family. It’s the idea of connection is what it’s about. It’s moving and it’s fun.”

British-Iraqi-Belgian actor Tommy Sim’aan, who’s playing Tybalt,  is best-known for his appearance in TV series Doctors, and he’ll shortly be on Sky in a new version of The Midwich Cuckoos. He graduated from Bristol Old Vic – as he says “into nothing” as it was mid-pandemic. But since he has done video game work, showcases at national film and TV screenwriters’ events, as well as a tour of The Legend of Sleepy Hollow.

How would he describe Tybalt? “He’s not creepy but he is nasty – we need to know why he is the way he is – he’s a bit of a brute and violent in Shakespeare’s play, but Rachel has fleshed him out. He’s an outsider on Lady Capulet’s side of the family. He comes from an interesting place in his mind and he’s finally able to let go with Mercutio, though he’s very firmly in the closet.

“You wonder – has he had these queer thoughts before? – the script says he’s ‘plagued by thoughts’, but he’s never gone in search of carnal knowledge. He’s dutiful and bound by honour – he doesn’t feel he’s meant to enjoy himself or let go.”

Both actors agreed there is comedy in the initial awkwardness of the growing queer relationship between them. Tommy said: “We’re in a world of hyper-masculinity – the rugby changing-room world – a super homoerotic world without being homoerotic at all.”

Is this queer love doomed? Go see the play to find out.