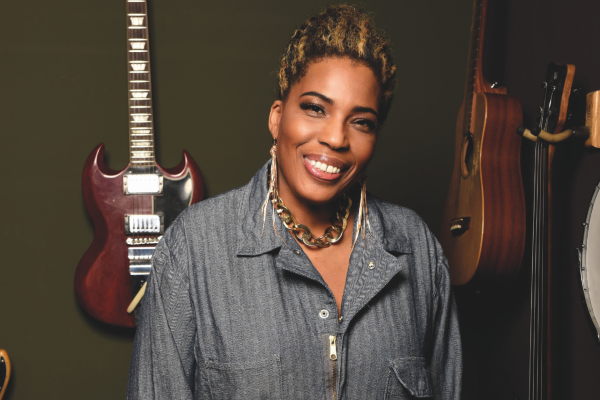 Alex Klineberg catches up with R&B/soul legend Macy Gray to discuss her new tracks, working with Frankie Grande and her LGBTQ+ fans Macy Gray released her first album On How Life Is in 1999. The lead single, I Try, became one of those smash-hit records almost everyone on the planet can sing along to. Very few artists have broken through with quite the same level of impact.

Undone and The Disco Song are Macy’s latest singles, and they’re as good as anything she recorded in her imperial phase. She’s currently recording with R&B/funk collective, California Jet Club. We caught up with Macy to discuss her new tracks, working with Frankie Grande, travel and more.

“I advertise being yourself, being honest and saying what you feel, no matter what anybody says. And no one embodies that more than the LGBT+ community”

What’s the inspiration behind the song Undone?

“To me it’s so appropriate for everybody’s life; it’s about stripping it down and taking the time to discover who you are. It’s also about what love can do to you, how it can bring you to nothing and make you do things you never thought you’d do.”

The video really brings that to life. It stars Frankie Grande in drag, tearing it up in his inimitable way.

You worked with Ariana Grande before, is that how you came to work with Frankie Grande?

“No, I was already following him. All through lockdown he was posting videos of him singing in the bathroom. He would always be topless and he’d have on all this makeup. He’d be doing these Broadway songs – things you do when you think you’re alone, but he’d be doing them on social media. I thought this dude is wild. When we got the idea for the video I decided to call him. He’s very expressive, very epic; he’s a fun guy with huge energy. Frankie is really passionate about everything he does so he was perfect for it.”

Was it his idea to do it in drag?

“No, that was my idea. There’s a quick shot of him with tape over his balls – that was his idea! We wanted to go quite full on with some other stuff but he said ‘no, I don’t want to do that.’ He didn’t know how the LGBTQ+ community would take it.”

Do you feel an affinity with your LGBTQ+ fans?

“I think so because through my music I advertise being yourself, being honest and saying what you feel, no matter what anybody says. And no one embodies that more than the LGBTQ+ community. To be honest about something that’s still taboo but to still come out and be who you are. Some people live in countries where it’s still illegal. I think that’s where the connection is.”

The Disco Song presents quite a contrast to Undone.

“Disco is the best music. It’s a recipe of many styles mixed into one and it puts people on the dancefloor. It’s the one genre of music that’s survived. It transformed into dance music. I’ve always loved that style of music and those old Giorgio Moroder and Donna Summer records with the big orchestration – it’s the most amazing sound. We wanted some disco on the record and we kept calling it the disco song: that’s where the name came from. We didn’t write the lyrics until the last day we were in the studio.”

Macy has one of the most distinctive voices in modern pop. How did she develop her singing style?

“The tone was always there. There’s also alcohol and lots of weed! I still have a vocal coach, Roger Burnely. And of course touring – nothing is better for your voice than touring, if you do it right. You’re practising every day for two hours. It’s like anything else, the more you do it the better you get. As I get older it’s developed more; it’s definitely more seasoned than it used to be. I can control it better than I used to.”

The music industry is notoriously tough. Is it difficult to sustain a music career longterm?

“It is because it changes almost everyday. The way we hear music has changed dramatically. There are CD buyers out there but mostly everyone streams. Radio is a lot less important than it was. People have different ways of listening to music. You can programme your own radio station and only hear what you want to hear. The styles of music have changed too: hip hop has changed, pop has changed and rock & roll has changed. To survive all that and pop up 20 years later is an accomplishment, I think.”

“The styles of music have changed too: hip hop has changed, pop has changed and rock & roll has changed. To survive all that and pop up 20 years later is an accomplishment, I think”

Were you shocked by the scale of success you had with your first album?

“Yes, I was, I wasn’t expecting that. I remember in my first week I sold 8,992 records. I was jumping on my bed; I thought I’d made it because I’d never sold records before. I was happy with my 8,992 but when it kept going no one was more surprised than me.” The album went on to sell over 10 million copies.

Who are your biggest musical influences of the past and today?

“Of the past I’d say the regulars: Aretha Franklin, Prince, Stevie Wonder, Bob Marley, Nina Simone, Billie Holiday and I’m a huge Led Zeppelin fan. I also love Biggie, Jay Z and Kanye West is a big influence. The new ones I wouldn’t say anyone is influencing me to the point that I’m changing my style, but I admire a lot of new artists.”

Do you enjoy touring?

Will you be coming to the UK?

“Yes, we’re on our way. We’re doing the Playground Festival in Scotland. Next year we’ll be coming back. We start a worldwide tour in May 2022 and we go straight to the UK where we’ll be playing in a lot of cities.”

For more information on Macy Gray check out their website www.macygrayofficial.com