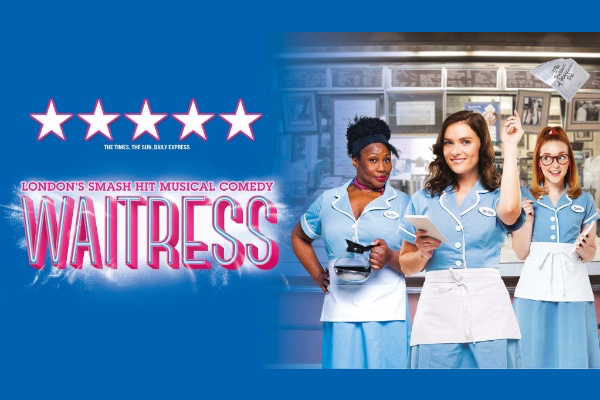 This is a real feel-good musical, adapted from Adrienne Shelly’s cult 2007 movie of the same name with just the right amount of drama and tension to generate that most magical of musical vibes – connection.

The music is fab, a wonderful combination of solo’s duets some fun trio’s and full choral delights which give you goosebumps, this cast is on fire and there’s not a single person acting, singing or playing who doesn’t shine.  It’s a very slick night of performance from Director Diane Paulus and that allows us to relax and enjoy the everyday lives unfolding on stage.   The sets, from Scott Pask are a loving homage to Norman Rockwell’s mid-town americana, costumes, hair and sets adorned with fine detail.  The accents are a bit all over the place, but hey, who cares! The cast never seem to stop, choregraphed with such precision that all the whirling changing of scene, costume and props merging into a balletic vision of delight, the opening scene sets the bar high and keeps that beat strong.  The small stage of the Theatre Royal Brighton can often restrict this kind of busy movement, but last night’s dancers, singers and stagehand flowed with a careful rhythm which was a delight to watch, the twirling chaos all coming together to a perfect flash of stagecraft, time and time again.

The singing is refined, cosy comfort-food, with some stand out performances across the vocal range,  Sara Bareilles’s country-rock-ish music charming but oddly unmemorable, and Chelsea Halfpenny Jenna’s giving a late in the show heart stopping ballad of loss and regret “She Used to Be Mine”, which gave me the shivers and crystallises the unique feeling of this musical being all about people letting each other, and themselves down, then forgiving and moving on. It’s been a long time since I’ve heard an audience so excited in the interval, lots of people, lots of women in fact all discussing their own experiences reflecting what was happening on stage.

The plot revolves around small town America, and ordinary women’s lives, their hopes and dreams, their daily experience and how an unexpected pregnancy impacts.  Pies, baking and creating are the dominant metaphors here, and there’s plenty of love, but almost all of it with other people’s husbands, wives or partners.   The main trio give us a lovely examination of women friendships, supporting, encouraging, and empowering each other. The men in their lives, fathers, colleagues, bosses and friends are shown as men also trying to deal with their lives, some of them failing, damaging others around them, others rising to the challenge of being honest to their feelings.

Hard subjects are tackled well, and it’s been a long time since I’ve seen domestic violence dealt with properly on stage, looking at the generational impact of growing up with violent men and exploring coercive and co-dependent men with such clarity.  Waitress feels like it shouldn’t work, like it’s a messy recipe for disaster – a domestic-violence drama, wild sex comedy and workplace rom-com – but like the lead characters knack for creating unusual combinations and taste sensations in her pies,  the musical really works, engendering a feeling of trust in the characters, giving them all space to develop their own lives and offering a series of endings which, although sugary & sentimental,  most of us are familiar with. The sex scenes are played for laughs but also have a real erotic tension in their absurdity, which just makes them more fun to watch.

Waitress reminds us that adjusting to our complex lives, grabbing happiness when we can and understand the freedom that our own agency gives us, offering no apologies for our choices and grasping the potential of our futures is real living.  The 90% female audience reacted to these interwoven plot lines with huge warmth and there was a real buzz in the theatre and after the show.

The first act is a classic musical set up, getting all the ingredients into the right place, with plenty of well-known tropes all done well, but oddly devoid of much humour. The second half opens oven ready with some strong laughs and just continues to climb from there.

This is a fizzing fun and quirky show, I was delighted by it. It’s lovely to enjoy such a clever combination of writing, lyrics and music which pull the classic arc of musicals into a modern messy genre mixing focus. But in a charming sweet way which belies the sophisticated work going on beneath this engine of entertainment, there are no heroines in Waitress, just a huge amount of love and hope and We even got a shout out with a reworked new pride flag from the stage!