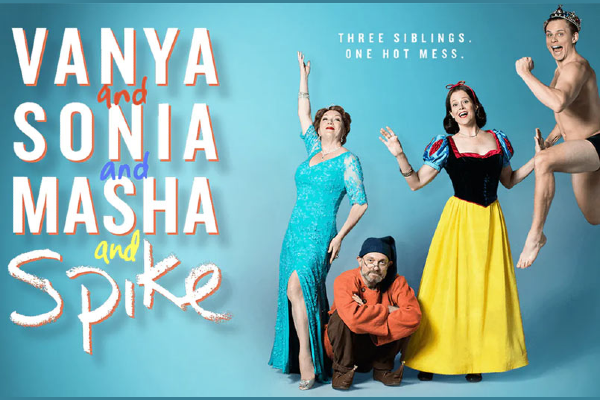 Playwright Christoper Durang’s love affair with the Russian 19th century theatre great Anton Chekhov is evident in every line of this outstanding comedy about the tedium of middle-class life in deepest Pennsylvania.

In a rambling stone-built house in the middle of nowhere we meet Vanya (Michael Maloney), a lonely, sad, benign gay man, who is secretly writing a play about the after-effects of global warming. He lives with his sister, well adopted sister, Sonia ( Rebecca Lacey), an outsider, equally unfulfilled, feisty and sharp and prone to throwing coffee cups at walls.

Their peace is shattered by the arrival of their sister Masha (the fabulous Janie Dee), a monstrous, egotistical and deeply insecure movie actress, who has for years bankrolled the other two to look after their parents and after their death, to maintain the house which belongs to Masha. Problem: Masha now wants to sell the house from under them.

Some light comic relief and a large amount of eye candy is provided by Masha’s toyboy Spike(Charlie Maher), a brainless beefcake man, who finds it difficult to keep his clothes on for more than five minutes at a time. The cast is completed by a totally manic fortune-telling cleaner Cassandra( played at 100 miles an hour by Sara Powell), and the visiting ingenue, naive wannabe actress Nina ( Lukwesa Mwamba).

The first act, setting up this intriguing situation, is outstanding in its comic timing, and fast pace, thanks to director Walter Bobbie. But when we come back for Act Two, there is a huge problem. It’s as if Durang had no idea what to do next and didn’t want to move so soon to a tidy finale. So we get two meaningless interludes – first a reading-out of  Vanya’s experimental post-Armageddon play, where the characters are all molecules. And then fired by Spike’s disinterest we get an interminable rant from Maloney’s character, which really is just a huge tribute to 50’s and 60’s tv culture, and a foreboding of the future.

The play is full of questions: will Masha sell the house? Will the missing blue heron re-visit the house’s pond? Will Spike keep his clothes on or even strip further? Will Sonia’s first date be a hit ? Can a small group of fruit trees be called a cherry orchard ( see what the author did there ?).

In the end the true brilliance of the night is the acting – first class honours to all the cast, especially Janie Dee, whose character  gives more than a nod to several Meryl Streep creations. And Rebecca Lacey’s impression of Maggie Smith is worth the ticket price alone. I know it won a Tony, but there’s an absolutely brilliant 75-minute play desperately trying  to get out of this top-heavy structure.