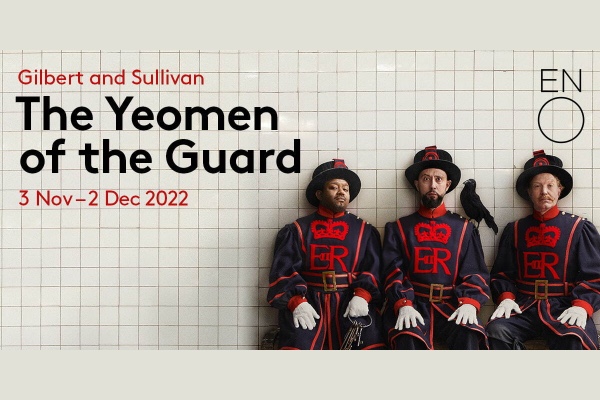 The Yeoman of the Guard

This Gilbert operetta is set at the Tower of London, Sergeant Meryll, of the titular Yeomen of the Guard, lives with his daughter, Phœbe Meryll who has gained the eye of the Jailor,  Wilfred Shadbolt. Wilfred, of course, has noticed who Phœbe has her eye on: Colonel Fairfax, a much grander man. Unfortunately, he’ll be a much less pretty picture without a head, as his execution is scheduled the same day.

This is the first ENO production of Yeoman and as the home of English Opera a fortuitous choice indeed. Yeoman is a slightly less comedic opera than the usual G&S fare, a dark story, not so much topseyturvey plotting and thematic approaches to character which are less than consistently silly.  Director Jo Davies has taken this Shakespearean 16th century story of capital punishment, intrigue, unrequited love and impersonation and thrown it wholeheartedly into the early 1950’s, giving this brave new world of early post war Britain a sentimental familiarity. The pomp and crepuscular ceremony associated with the rituals of state, that we are all so recently familiar with ( following the death of the Queen) are recreated on stage with Anthony Ward’s costumes belted, booted and buckle in a gloriously uniformed way, nostalgically folded into cod echos of the ancient rituals of the Tower Of London, the setting for all the action and the symbolic heart of the nation. This grimness of the Tower is wrought carefully through Wards set, all dark chamber, hanging chains and wide open walled spaces and glorious though the  Tower set is, there’s a feeling of emptiness to the vast Coliseum stage when it’s only got a few characters on it.

Soprano  Alexandra Oomens is splendid singing Elsie Maynard, running a full gamut of emotions from innocence to feral street girl, and convincing with the tenderness needed for a young girl who dreams of being a wife. She shines in the ensemble numbers and her pure voice sores across the colosseum’s vast spaces with a diamond clarity which were high points of the evening. Anthony Gregory is a triumph as Captain Fairfax,  his rich lyric voice underscoring the passion at the heart of this character.

Heather Lowe sings  Phoebe Meryll with a sweet passion joining voices with tonal perfection with John Molloy as ‘assistant tormentor’  Wilfred Shadbolt.  Though singing on top form he offers an Irish accent which fades in and out. His paring with McCabe in the second half is a delight. Susan Bickley fails to convince as Dame Carruthers unusually so for this ENO stalwart but certainly looks the part and has a fond sharp chemistry with Neal Davies’s Sergeant Meryll.

Sir Richard Cholmondeley sung by Steven Page is terrific, charming and convincing, gliding around the stage and presenting an engaging performance, his voice delights. Conductor Chris Hopkins keeps the full pit in his confident control and although the projected faux BBC newscast rather overshadows the opening the orchestra are in fine mode throughout.

The chorus are superb, as they so often are and although anachronistically dressed as prison guards the female singers glide, move, march and own the stage. Mark Biggins has polished the chorus to a brilliant sheen and they glow with confidence and fill the stage and auditorium with their brilliant sound. Some of the mens dances are a bit daft, but it’s G&S and it gets a laugh. I adored the tap dancing Guards in their bearskin hats, simple physical comedy done with cheeky zest.

ENO  has taken a punt with Richard McCabe who although an actor of superb range and conviction is not a professional opera singer, this shows through on occasion with his pace taking a bit of hit, but the singers surrounding him wrap him in their tender excellence and I forgave his lack of musical perfection for the rather delightful comedic desperation he brought to his role of Jack Point: a down at heel, Max Miller type clown played with rich texture and a real pathos which underlined the jolly happiness of the characters around him. A gamble won, as a first operatic role which can only improve he commands the stage with his hunger, reflecting on contemporary life, the abject failure of Brexit and meta performance to the audiences real delight.

Full details of the cast and creative team here:

Jo Davies imports  ‘It Really Doesn’t Matter’ from  Ruddigore offering that classic patter song and extra fun; ultra G&S but with updated smoothness for an ensemble with some funny choreography  from Kay Shepherd which the audience much approved off, laughter rippling around house.

Overall a successful night and a polished  introduction to a remodelled  Yeoman. Offering a fine evening of nostalgic semi serious opera with its heart of G&S essential silliness maintained, I enjoyed it and for an entry level show of what the ENO does well this would be an excellent option.

With the wretched news about the ENO funding this week, this exciting musical space needs our help more than ever and like every special space if we don’t use it, we will lose it.

Until 2nd Dec for dates, more info or to book tickets see the ENO’s website here: