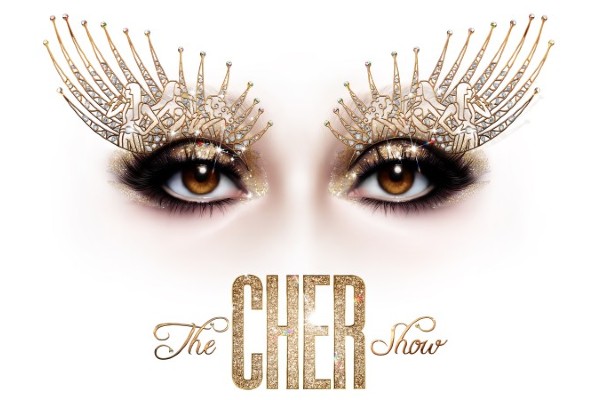 Cher is the only act in history to have a No. 1 single in each of the last 6 decades which makes her the undisputed Queen of Pop, there are other monarchs of course, but she has ruled the longest and this musical attempts to grab some of the glittery joy of the last six decades of her music and stage career and chart it’s astonishing ups and downs.

We have a trinity of Cher’s, Cher to the power of 3, reflecting her reinvention over the years,  offering some surreal takes on her own music being sung by a few Cher voices, but in analogue harmony rather than 8 track or postproduction magic. Each Cher here representing a different emotional period, the exquisite, fragile but filled with endless talent and energy ‘Babe’ (Millie O’Connell), the Reckoning Cher when she starts to wrest control of her life from the men determined to exploit and control her ‘Lady’ (Danielle Steers) and mature Cher, gentler, wiser, but still filled with the passion for performance and achieving her dreams’ Star’ (Debbie Kurup).  Guy Woolf, who stepped in to play Sonny Bono, a part he understudies, was remarkable this evening, played with arrogance and control but giving him humanity in his wish to see the duo succeed. Cher’s mother, Georgia Holt is given the warmest part here, showing unconditional love in a dirt poor upbringing and sharing hard won emotional wisdom with daughter, throughout her showbiz career, and Tori Scott’s triumphant singing supported this strength of character.

It’s a beguiling set up, allowing the different Cher’s to interact, care, admonish and encourage each other as the fragilities and challenges of her impressive range of talents across three main sections of her career, are presented to us. There’s a knowing humour running thought this performance, reflecting contemporary Cher’s own approach to her career, gracefully nodding to her rich vein of camp and the legions of Gay male fans who have adored her and known her in their dance floors and anthems. It’s testimony to the emotional thrall that Cher keeps her worshiping Queers in,  that there was a huge, and I mean HUGE range of Queers packing out the Theatre Royal last night, from a royal box full of young fierce Drag Queens to the stalls full of ageless silver-haired Homo’s, there was enough Botox on show to give Cher an extra decade of life and the excitement was electric.

The crew who crafted this show really know how to offer up the Oomph and the choreographed frenetic, full rigging brilliance of the lights, dancing and sound are top notch, giving the show a quality feel and allowing it to transcend any suggestion of it being a tribute act. Written by Tony award-winning Rick Elice, this UK production is directed by Arlene Phillips, choreographed by Oti Mabuse, with costumes by Gabriella Slade it simply slays. This shimmering new production features a fresh take on her show-stopping costumes which earned her the title of “the ruler of outré reinvention” from Vouge, the set is simple, rolling on and off, with mirrors and bars displaying the chronological progression.

This is a big show, rather neatly crammed into the small spaces of the Theatre Royal stage but you can see how it will look in the West End when it, eventually gets there. It’s planned, plotted and built for a huge space and the production values, staging and lighting feel far more stadium concert than rococo vintage theatre.  The super polished production values hide a ratty plot and script, but everyone knew the stories and music, so it was more a bouncing ball narrative than launching any surprises at us, did I learn anything? Hmmmm, that Cher won an Oscar!  People who abused her are given a tender posting here reflecting perhaps more of Cher’s own personality and ability to forgive than their own devious exploitative natures, but the focus of the show is  Her, not them, and the overall psychological insight offered into both the choices in her singing and performance life are backed up by the insights into her romantic choices, allowing the women who is Cher to reach an emotional maturity whilst the show unfolds. It’s neatly done, watching her empower herself, her experiences giving insight and strength and ultimately power and agency over her own life. She’s renowned for battling for fame and autonomy in male-dominated industries.

The Theatre Royal Brighton has a strict policy of asking people, quite rightly, to turn off their mobile devices before a show starts and prohibits photography or filming of any show, this was stated clearly at the beginning of this show. It’s hugely intrusive for people to be using devices to film or photograph inside a dark theatre, so quite why the cast openly invited people to film them during the final parts of the show is not clear. Obviously, they harvest a rich stream of badly focused, badly filmed social media content which allows the show to ride a wave of mediocre TockTicked Insta Twitwaddle all the way to the bank but it also gets in the way of those of us that like to watch a show. The people in front all had their phones out, urged on by the cast, holding their cameras up, fully lit and bright, blocking the view of the people behind, even though everyone was standing. Simple bad manners, it’s not Cher on stage, it’s not a concert, it’s not on. Three shorter people next to me, who had paid a goodly sum for their tickets missed out completely on the last fifteen minutes of the show because of the selfish behaviours of the phone maniacs capturing wobbly footage of the show and staring unresponsively at their screens. Beware cast, you’ll reap the whirlwind!

It spoiled the evening and the Theatre Royal needs to decide if it has rules or not which allow for the whole audience to enjoy a production or just a small social media addicted part of it….

My companion who only knows Cher from Believe enjoyed themselves, smiling at the glittery energy being shared by the dancers and singers on stage and left surprised by the breadth of her artistic abilities. The singing was superb across the board, all three Cher’s delivering timeless songs with a passion and emotional connection that the audience adored.  Offering their own instantly recognisable take on Cher and her distinctive alto voice whist driving their own passion into the musical, when they combined voices, the Tripartite Cher affect was amazing and more than made up for the jukebox musical shortening of some of the other songs.