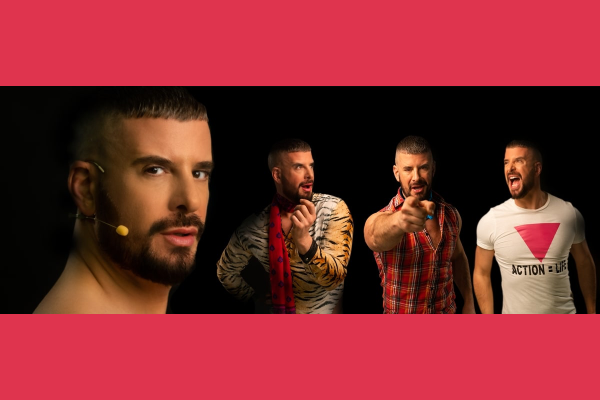 It’s nearly curtain up and actor/writer/director Alexis Gregory stares nervously into the dressing room mirror. The camera follows him through cavernous corridors onto a bare stage in a vast and empty Hackney Empire Theatre. It’s a magnetic opening by director Rikki Beadle-Blair to Riot Act and there are many more magic moments in this whirlwind 75-minute solo show made up three monologues taken by Alexis from verbatim interviews.

The show covers the momentous events surrounding the Stonewall Riots of 1969, which followed a police raid on the Gay bar the Stonewall Inn, but it also spreads its canvas across the advent of AIDS, the Gay Liberation movement and the radical drag queen cabaret scene

Act One introduces us to Stonewall eye-witness Michael Anthony-Nozzi, who aged 17 was on the first day of an acting course in New York when the riot happened. He tells us: “ it’s a place I never want to come back to”, but admits “ it gave some people a home where they wouldn’t be harassed”.Nozzi gives us a sharp, somewhat acid view of the old drag queens on the scene – dressed in their mothers’ old three-piece suits, mingling with young hustlers and older Gay men in Hawaiian shirts. It’s bitchy but funny and Alexis carries off the characterisation brilliantly. Some young guys would turn a trick for a roast beef sandwich, we’re told, but our laughter soon subsides as the then-student recalls the police’s terrible bloody violence against  the Queer community, the week after Judy Garland’s death.

Nozzi tells us :” I finally found people like me”, but he then fast forwards to the onset of AIDS:” I buried 38 friends in one month- we lost 80 per cent of our people”. He also highlights the permanent chasm he observes to this day between the survivors and the people coming after them. His final words are to urge the young Queers of today to show respect to the Oder gays still around. It’s a stunningly powerful ending.

Act Two gives us the vicious tongue of the marvellously outrageous drag performer Lavinia Co-op. Alexis catches precisely the camp voice and deadpan humour of the Hackney boy who thought he was ill, when all he was was Gay. He charts the rise of the Gay Liberation movement in 70’s London: “ you realised there was more than bars or toilets or isolation”.

Lavinia tells us of drug parties in the local town hall, but also about a new emerging scene of men in frocks who were not trying to impersonate women – “ just developing what you could be, breaking the rule; we weren’t saying we were gay: we just were gay – why is that politics ? Why is it still an issue?”.

Lavinia gives us a marvellous insight into the ground-breaking Bloolips cabaret/theatre group formed by the great Betty Bourne, and which took Lavinia and the others to huge success in New York, playing to audiences containing Mick Jagger, Sigourney Weaver and Joel Grey. “ I work in safe-ish spaces where I can be strong. It’s hard to always be yourself and be out – I’m 70 and I say I am different- I can’t give you the answers; I haven’t got the script”. Alexis has of course but we must remind ourselves constantly that these are all real words and not a dramatist’s imaginary world.

Act Three gives us Queer activist Paul Burstow and a much more harrowing look back at the ravaging effect of AIDS. Emerging in a period of ignorance, there was a thory that as the condition was thought to be an American phenomenon Gays should avoid the Queer venues of Earls Court where many Americans lived. Paul recounts the loss of so many friends, what he calls “ the cumulative grief which I haven’t yet processed; the survivor’s guilt and anger and the fact that people not affected didn’t get there was a war going on. The deaths politicised me”, he tells us.

Paul gives us a fascinating insight into the birth of Act Up – a demonstration-based group of activists. “ There were lots of Lesbians involved – they’re often written out of the story, which makes me cross. They were very brave women : they were really there for us”. He tells of his women friends who abseiled into the House of Lords and disrupted BBC Tv news.” We were slagged off by the Gay Press for being disruptive,but we needed to get people to sit up and pay attention. We’re fighting for our lives-literally, as an embattled community”.

It’s a brilliant roller-coaster of a show. Beadle-Blair’s skill is to bring the camera up close and personal, allowing Alexis to give us knowing looks, deep-seated anguish, anger and dark humour. It’s a tour-de-force performance that is relentlessly honest and inspiring.

Burston concludes that today there is a lack of community history about these events. For those of in our 70’s it’s a timely reminder of our past; for those younger it’s an educational journey through a period that made our Queer liberal days today so treasured.

Riot Act is streaming throughout February as part of LGBT History Month – tickets at stream.theatre