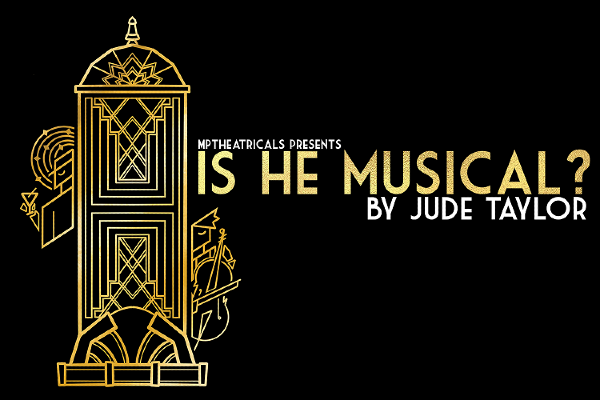 Based on a mass of historical documents, and slated for the cancelled Vault Festival, Is He Musical follows the emergence on the scene of Laurence, a spoiled little rich boy who is trying to cut his financial ties to his father – but not quite yet.

Hitting upon the famous Long Bar at Shaftesbury Avenue’s Trocadero he meets a sisterhood, with whom he can identify – and none more so than Wilfred, footman to the mysterious libertine Lord Hemsworth. Wilfred, aka May tell us: “ I’m not a woman nor a man: I am a powerful force.. call me they/them”.

As Laurence’s arc of personal development grows, Wilfred’s diminishes, and they become less a mentor and centre of attention, while their private life, so promising, also takes a dive.  Laurence, now dubbed Lillian, takes a lover who has caught his eye in the Gods of the Alhambra Theatre. And so we get snatches of the music hall ditty “ The boy I love is up in the gallery”, with a delightfully light trio backing of violin, cello and keyboard.

The show is peppered with songs that reminded me of the gaiety of Sandy Wilson and Vivian Ellis, never too taxing but always pleasant to the ear. Laurence, branching out, goes to the new racy Caravan Club, described as London’s greatest Bohemain rendezvous, with its all-night gaiety.. “ a different crowd, bold and loud and a strange kind of danger”, Laurence sings.

The emotional momentum of the story reaches a peak when the Caravan Cub is raided by the police- a true life event. This is no Nazi attack on the Kit Kat but what the show doesn’t go into is the infamous trial that resulted in more than 70 acquittals but sentences of hard labour for the club’s organisers.

Barry O’ Reilly looks and sounds like a young Ben Wishaw – no bad thing in itself – and his smiley personality nuances from ingenue to a slightly bitter worldly wisdom. Teddy Hinde, bespectacled and with a pleasing soprano range, are spot on as the enigmatic, but ultimately unfulfilled non-binary victim of not getting what they want in life. Their most moving song is about their dreams of being Lord Hemsworth’s “ good housewife “. As they tell us: “ Isn’t it strange how married life will never be for the likes of us”?

Director Matt Powell uses the small acting space to best effect, with Laurence’s apartment on one side and the Trocadero/Caravan Club on the other. Musical Director Francesca Fenech on keyboards even gets dragged into the action and dubbed Lady Lavender.

I think there’s the basis for a truly impressive full-length musical here. What it needs in my opinion is a lively ensemble to populate the two Queer clubs, and we need to see the three offstage love interests of the two main characters – particularly Lord H.

You can catch the show on demand until Sunday 6 March – mptheatricals.co.uk