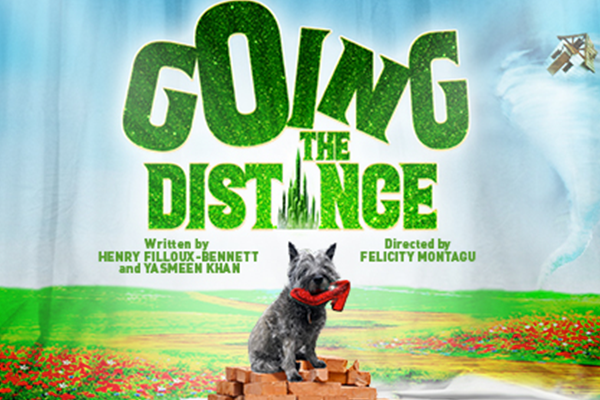 When lockdown started over 1000 UK theatres went dark and many feared for their future. And that’s the backdrop to a sparkling digital comedy Going The Distance by Henry Filloux-Bennett and Yasmeen Khan. Frank is the hapless but well-meaning chair of the Matchborough Community Theatre which may have to close its doors forever. Unless.

Unless it can mount a block-buster version of the Wizard of Oz  to raise funds. An extraordinary extraordinary general meeting is required. And so via Zoom we meet not only show director Frank ( played with resigned deadpan humour by Matthew Kelly), but also Rae – who is a domineering social media expert – or thinks she is ( Sarah Madland). Then there’s treasurer and theatre stalwart Maggie ( a marvellous mixture of frailty and determination by Penny Ryder).

Frank is now with boyfriend Gareth and the last person he wants to see is his ex-wife Vic, ( Shobna Gulati) so she ofcourse is the next person to turn up as the erstwhile playwright of their offering. If this all sounds trivial – it really isn’t. Apart from the thousands of non-professional theatre-makers who will identify with the flaws, foibles, dramas and joys of putting a show on, it has a universal message, through its sarcastic comedy, about human resilience, the joy of making art and the fragility of the world of culture in a pandemic aftermath.

There are many priceless moments – the dreadful auditions, the domestic battleground betweeen Frank and Vic, the innocent joy of Gail,the would-be Dorothy ( played with a touching warmth by Emma McDonald) and the antics of Maggie’s dog as Toto.

And there’s a frightful, tactless radio interviewer played deliciously by Sara Crowe. The whole is narrated by an unseen Stephen Fry, whose mellifluous and sharply ironic tone is reminiscent of David Tennant’s voice-over in BBC TV’s W1A.

And a finale joy is to hear Emma give a simple but beautiful rendition of Over The Rainbow to the unseen audience of her possible boyfriend. Central to the friction in the play is the spectre of professional actress Billie (Nicole Evans) who is as bitchy and vile as a good fairy could be.

Does the play get staged? Do the audience come? Does the theatre survive ? – buy a ticket to the digital streaming because I’m not going to tell.

Directed with pace and a great warm feeling by Felicity Montagu, Going The Distance is a collaboration between the Lawrence Batley Theatre, Oxford Playhouse, The Dukes and the Watermill Theatre. It streams until 17 October – tickets at goingthedistanceplay.com