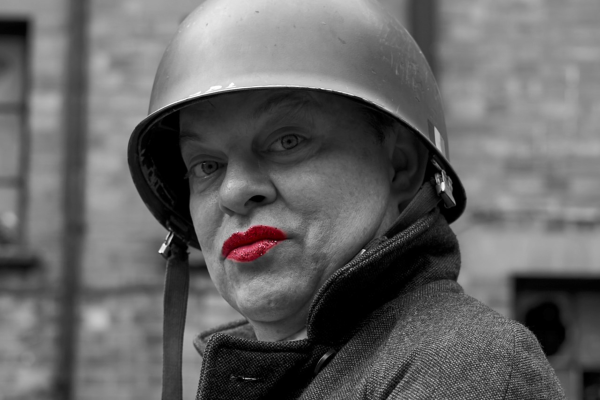 It was Churchill’s idea as part of the 1939-45 war effort that Gay men should be recruited as spies to be sent to occupied France under the noses of the Nazis.

The theory was that Queer men, who were used to breaking the law by being Queer were good at deceiving people round them about their true nature and identity. So in Paul Stone’s wonderfully colourful play For Queen And Country we meet Major Denis Rake, who is decorated with the Military Cross for his daring and life-risking exploits as a wireless operator behind enemy lines.

It’s a true story – Denis indeed being a musical theatre performer and drag queen in civvy street, and Neil Summerville’s portrayal is both raw and tender, leaning heavily on drag patter to tell us his story, often with salacious interludes about his sexual exploits – even a brief fling with a Nazi officer.

Neil starts off his tale of adventures while putting on his make-up and frock and wig- as if for some farewell performance that we are to be witness to. He engages with the frighteningly close audience  and there’s a genuine and generous spirit about his interaction with us.

Directed with warmth and pace by Paul himself, the dialogue is counter-pointed with period songs, for which Paul has written new lyrics relevant to the story and Neil puts them across with force and energy – I particularly like his Marlene parody Falling Down Drunk Again, and the innuendo-laden Kiss Me Goodnight Sergeant-Major.

It’s all too soon over after 60 minutes but what a heart-warming story of Queerness in adversity. Watch out for its tour dates in 2022 – I do hope it pitches up in Brighton.

For Queen And Country was at the King’s Head Theare, London.