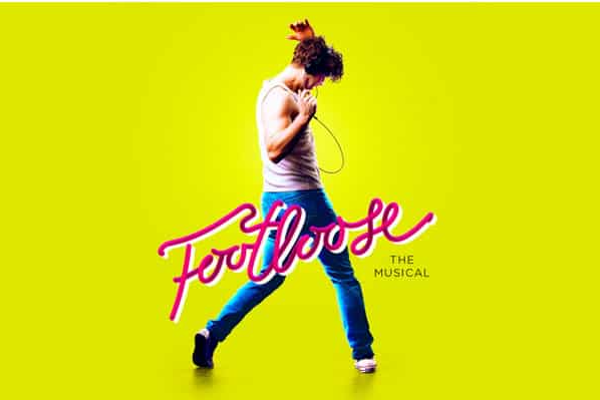 Based on the 1980s screen sensation Footloose with some extra classic 80s hits dropped in,  this is a cast of all singing, all dancing and also all playing young talent. All the music for the show is played by the actors on stage which gives the show real energy from the opening.  The plot follows city boy Ren, forced to move to a rural backwater in America to find dancing and rock music are banned. Taking matters into his own hands Ren has all hell breaking loose and the whole town on its feet.

The set is fun and moved in, out and  around a lot, in the tight staging of the Theatre Royal this leaves things feeling cramped, but the cast know their steps and the dancing is spot on, with most of the ensemble playing instruments while they dance, act, sing and shift the set it’s quite the ask of them, and I was impressed with their ability to negotiate the space with grace.

The dance numbers are great fun, impressive, athletic, done with a wink to the audience and some playful teasing allowing the main leads to showcase their talents and keep the narrative thrust bouncing along.

There are a few extra songs shoehorned in, including a rather delightfully silly rendition of ‘Holding out for a Hero’ which allows Jake Quickenden to show off their rather more muscular skills & body and offer the mostly older female audience some energetic but light titillation whilst Darren Day serves some hot silver Daddy action to please other thirsty demographics in the audience.  This is great fun but when held up against the problematic treatment of male violence in the play, including two clear dramatised domestic violent assaults which are left unchallenged, this leaves me feeling uncomfortable. This part is froth, but this bit is not?  If the play is ‘in context’ I can understand this, but when a musical is attempting to update itself in lots of other ways this stands out as a jarring misstep.

It’s certainly full of energy and the enthusiastic audience enjoyed themselves, clapping along, cheering and generally giving the energetic cast a warm response.  My companion was grinning and tapping his toes along to the loud rock anthems being played on stage.  There are some touching moments when the cast really connect; a sweet trip of female voices lamenting learning to be silent whilst dealing with the damaged men in their lives, the main confrontation of two mourning men struggling to help each other cope with their grief and  offers up tangible lessons in forgives and moving in. The musical can’t seem to decide if it wants to be froth or meaningful, which is admirable, but stutters the direction on occasion.

The fist act is far too long, needs some sharpening up, those lighting cues really need to be hit, and the whole thing could do with a stronger emotional focus, but to cut the mostly young ensemble a bit of slack, this is also their first week so might just be opening niggles in the tight space of the Theatre Royal’s stage.   I slipped out into the cool night air on New Road wondering at some of the choices, but my companion  enjoyed himself a lot and saying how much he’d enjoyed the dancing.

The cast give it their all and for a feelgood show like this, that seems to be enough for the Monday night crowd who cheer and get up from their seats for the obligatory encore boogie in the aliases.