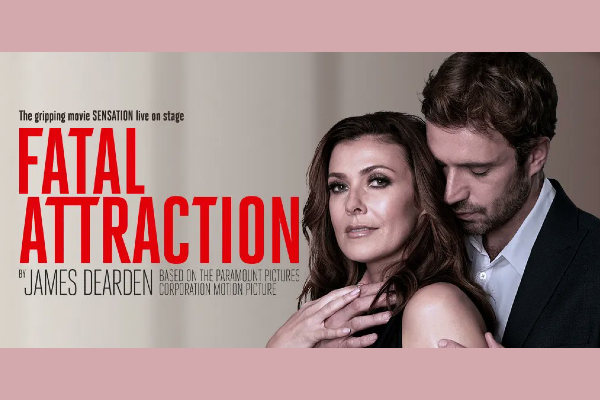 Fatal Attraction is a 1987 film which for various reasons doesn’t fit the times we live in. Interesting then to see what its original author will make of its stalking/predatory theme in these days of Me Too/ Weinstein/Maxwell.

The answer is James Dearden has kept pretty much to his original Michael Douglas/Glenn Close storyline, saving his big switch for the last two scenes of this breathtaking psychological thriller/cautionary tale.

The plot: Dan is an up and coming Manhattan lawyer, happily married to Beth and with a young daughter Ellen. When Beth goes off to see her mother for the weekend, Dan finds himself in a swish bar being chatted up by a glamorous editor for a publishing firm he does a lot of work for. Coincidence? Plan? Fate? Who knows?

Taking the lead, Alex suggests dinner and there’s a straight route to her bed. Dan, contrite and guilty, nevertheless makes one night into two with dire results. Though he tries to end the short affair, Alex isn’t having it, and there follows a series of bizarre incidents, centering on stalking and harassment on her part and then escalating to life-threatening events.

But I won’t give many more spoilers, because the end comes as a total shock and then is followed by a second ending that leaves you thinking long and hard.

Starting its UK tour at Brighton’s Theatre Royal, it gives us two heavyweight, believable and engaging performances from Corrie Royalty Kym Marsh and Oliver Farnworth. They are subtly nuanced performances under the direction of Loveday Ingram. Kym manages the move from glamorous flirter to damaged lonely and desperate woman and on to a revenge-seeker in a perfect emotional arc.

Farnworth’s character is less subtle, and he’s a tad young for the role, but he manages the growing panic and distress in a credible and creditable manner.

The staging is just magic. Morgan Large has designed a towering set of grey, opaque panels, whose shutters slide open and shut to create different locations. Videographer Mogzi projects on to them  a range of images – from Manhattan skyscrapers to live FaceTime views of the actors,  and leafy countryside, with a high speed car crash for good measure.

The shuttering is a central thematic symbol; to emphasise the point the couple make love to the music of Madame Butterfly and the sliding panels remind us of a Geisha house. The Madame B motif is back for the shattering climax of the piece.

There has to be some debate about how we treat this subject matter in 2022. Is Dan a culprit as well as a victim? And the same for Alex, though my feeling is we’re more with her than we would have been in the 80’s.

Fatal Attraction is on tour, and one more night (Sat) in Brighton if you’re quick, tickets here

I can imagine it getting a West End outing too.