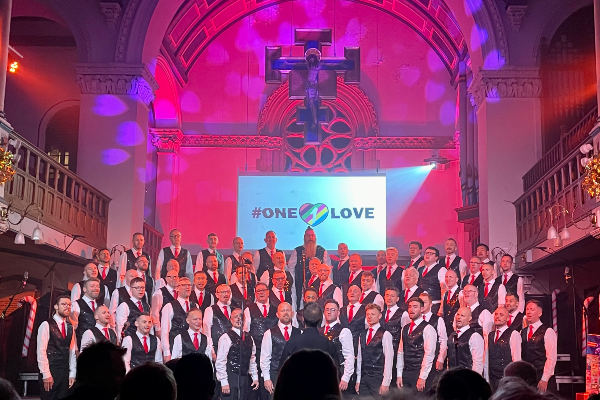 The quality bar has been set high as our choirs start their seasonal offerings. Brighton Gay Men’s Chorus, led by chorus director Joe Paxton and music director Tim Nail, kicked us off at St George’s Kemptown.

Opening with a delightfully jolly Christmas medley, they followed with Somewhere In My Heart with luscious melodies. John McPehsrson gave us a flirtatious version of I Couldn’t Live Without Your Love, complete with his crazy attempt at dancing.

I’m always blown away by the chorus’ rendition of Secret Love, with its Queer resonances, and they kicked it out of the park this time – Joe seeems to coax gentleness and beauty out of this large group and the harmonic progressions are stunning.

Graeme Clark gave us a schmaltzy, melancholy Christmas Time Is Here to prove the art of crooning is not dead, and the choir followed with a powerful and dramatic anthem in All The Lovers. Rod Edmonds hit some terrific high notes in I Wonder As I Wander, and the chorus showed their grip on controlled quiet singing in Happy Christmas : War is Over.

And the first half concluded with a wide array of camp moves and gestures in Vogue, and a vocal deluge in It’s Raining Men.

December Will be Magic Again was full of melodic and tempo surprises, and Alex Morley gave us more clear and exciting top notes in One More Sleep ’Til Christmas. Their highly emotional version of Over The Rainbow was underlined with a projected slide carrying the names of those murdered at Colorado’s Club Q.

Adam Betteridge is a great presenter of song and here he gave a stirring I’ll Be Home At Christmas, full of simplicity and emotion. The full a capella skills of this group came out in the beautifully haunting Coventry Carol and Kieran Moore gave us a Mae West-style Zat You Santa Claus?

Sadao Ueda and Declan McCrystal gave us a quirky Queer love duet with Mistletoe and the evening ended strongly with I Wish it Could be Christmas Everyday and Underneath The Tree.

In between the songs, we were treated to a quirky set of sketches with an unruly elf, a fake Santa and a real Santa, that varied in their funniness but that’s the Grinch in me coming out again.

Proceeds from this year’s two concerts go to Pedal People and choir member Adam Betteridge spoke with great feeling about the benefits of the Brighton charity which helps disabled people get mobile again – a service he knows all too well as it has helped his life partner Freddie in the aftermath of a  stroke.

So the choral gauntlet is down – come on you choirs !