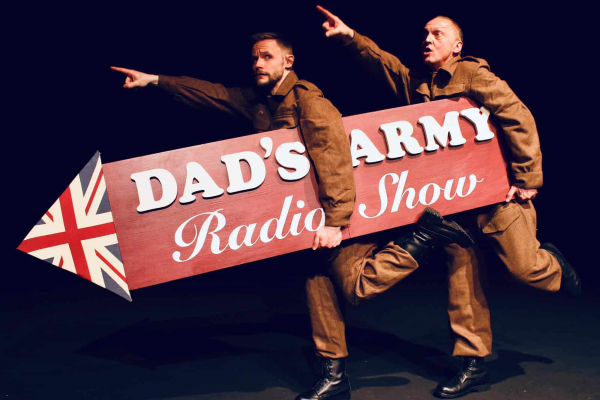 Created by Jimmy Perry and David Croft, Dad’s Army was a staple TV sitcom from 1968-77, with 9 series totalling 80 episodes – not to mention radio, film and stage versions. It poked gentle humour at the Home Guard – amateurs who would form the first line of defence in any German invasion in World War II.

What’s remarkable is that this version, filmed with a live audience at London’s Crazy Coqs cabaret venue, and soon to go on tour, is a trick within a trick – it’s a staged reproduction of two radio episodes based on tv ones. Got that?

More remarkable still is that all the many characters are played by just two actors – but what actors they are: David Benson and Jack Lane.

When You’ve Got To Go finds the hapless and gormless Pte Pike (originated by Ian Lavender) going for his medical to join the regular forces. The sickly boy is sure to fail, but no he passes with flying colours. Jack Lane pulls off the double voice coup of Pike’s mother and Pike himself, while Benson is a pitch- perfect Sgt Wilson – Pike’s supposed secret father- rock-hard safe in the wonderful mellifluous tones which John Le Mesurier originally brought to the part.

There’s a fish and chip supper to be held to send the boy off, but first a blood donation session to organise where Capt Mainwaring -originated by Arthur Lowe (Jack Lane again), pledges to supply 100 pints of blood but only manages 3.Cpl Wilson ( originally Clive Dunn and played brilliantly by Jack Lane),  – he of “ don’t panic “ fame, rounds up a gang of Italian POW’s and some nuns – don’t ask – and Mainwaring wins the day over his rival Warden Hodges. But there’s a twist in the tale and Pike is saved from active duty, but doesn’t tell the Cpt till after the fish supper – which he’s never had before. Amid the pathos rings out Mainwaring’s famous remark:”you stupid boy”.

The duo follow it with the final episode broadcast -Never Too Old – in which Cpl Jones proposes marriage to flighty widow Mrs Fox.

Again there are twists and turns and the wedding reception is interrupted by news of a possible sea-borne invasion.  There’s a long wistful monologue about lost love from the irascible Scotsman Frazier,played with gusto by Benson and Lane is touching in his rendition of the romantic old Jones.

It’s a terrific trip down Memory Lane, improved of course if you recall the originals. The quick-fire dialogue sometimes has the same actor in two conversations and playing  3 characters – it’s marvellous.

Catch the show live with a third episode added at various venues including Diss, Ashford, East Grinstead, Southampton ,and Horsham.