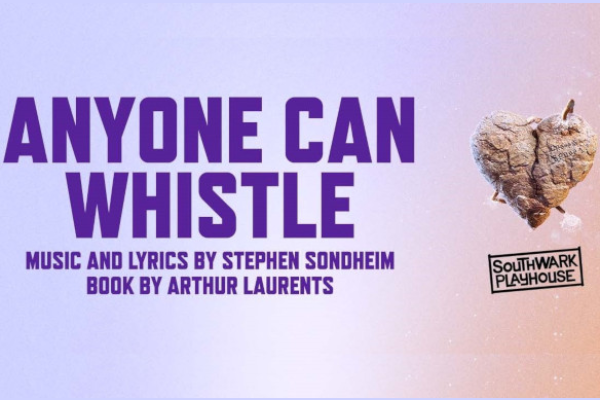 Anyone Can Whistle is a very early (1964), and problematical Stephen Sondheim musical, which is rarely performed fully staged. And there are reasons for its scant outings. Like some of its characters, it seems to constantly go off the rails in terms of its plot, and it’s also a problem in that it doesn’t have a consistent musical style. Like the later Follies, it relies heavily on pastiche and parody and yet the irony is that it contains some of Steve’s most lyrical love ballads.

Arthur Laurents’ book gives us a down-at-heels corrupt town where the Lady Mayor Cora (played with perfect comic timing by Alex Young), holds sway with a trio of conniving, snivelling henchmen in tow. To balance the books and keep her in power a miracle is faked – water spontaneously surging from a large rock. Trouble is that after City Hall, the town’s next largest institution is precisely that – an institution known as the Cookie Jar – where 49 “ cookies” are incarcerated.

If they are allowed to take the waters and are not cured of their madness then the hoax will be revealed. When they mix with the general populace – in this instance the audience -who is to tell who is mad and who is sane? A newly arrived “ doctor”,  J Bowden Hapgood, provides a solution in an incredibly complex and long-winded choral piece that really doesn’t work.

But then this plot line seems to have lost the interest of its writers and the show moves on to a good old-fashioned love story of happiness, and the joy of living. As Hapgood cogently puts it – there’s only one miracle and that’s being alive. Eventually the “cookies” are recaptured and the town next door attracts all the attention as another miracle is discovered.

To save us losing the will to live, Sondheim provides us with songs to die for. And they are great stand-alone classics; the title song, Anyone Can Whistle, There Won’t Be Trumpets and With So Little To Be Sure Of all pack huge emotional punch and are put across with honesty and emotion by the two love interests- Jordan Broatch as Hapgood and Chrystine Symone as the Cookie Jar head nurse, who later appears in disguise as a negligee-clad cod French woman – don’t ask!

Symone has a beautiful, clear, soaring voice and for me she is the show-stealer. Broatch has a broad smile,  and physical energy to spare, with a powerhouse of a voice. Alex Young has fleeting but hilarious scenes –  a part which marked Angela Lansbury’s musical theatre debut – albeit only for its few original performances. She has perfect comic timing and doesn’t miss a trick.

The show originally hit Broadway the same year as Hello Dolly and Funny Girl and it doesn’t bear comparison, but its subject matter of political corruption and the boundaries between normality and otherness are timely. Director Georgie Rankcom puts the action on an avenue stage with the audience facing each other on two sides and as corridor acting and dancing go, it works. The band, directed by Natalie Pound, is way too loud even with all the cast mic’d.

What is great to see is the diversity of the cast – three state in the programme that they identify as they/them and another says any pronoun will do. Let’s see some more of that please Mr Producers.

The show runs at the Southwark Playhouse until 7 May – tickets- southwarkplayhouse.co.uk