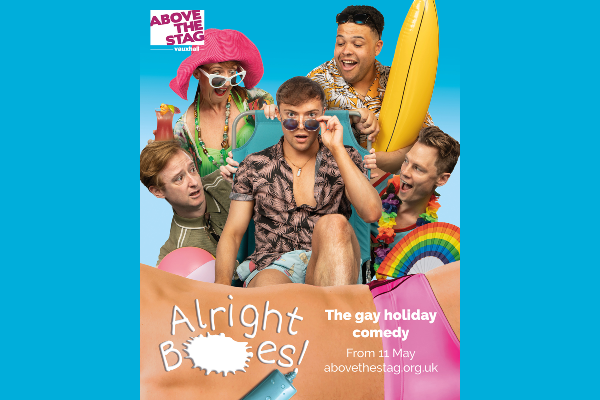 In the 1990s many of my annual holidays were at Queer complexes in Playa Del Ingles, Ibiza, Mykonos and Sitges. So it was a bit of a nostalgia trip to laugh out loud at Martin Blackburn’s romp Alright Bitches, which tells of a week at the slightly down-at-heels Los Hombres Gay holiday site in Playa.

Jason is an older man, a dour Scotsman who can’t fully cope with his recent drink rehab at the Priory, nor with the demands of his much younger companion Ollie. Max and Garth are just good friends – Mancunians who share a home in Balham. But Max has hidden longings and has to make fun of Garth’s constant one-night stands as a coping mechanism. Meanwhile Garth starts to tire of the Queer scene and suddenly feels his impending entry into middle age.

Pam is the honey bee- a straight woman who likes the company of Gay men -out for a holiday romance to end her virginity. And we all know that holidays – Gay or straight- can make romances blossom or derail relationships. Both happen here in this fast-paced sassy play directed with the precision of a farce by Bryan Hodgson.

As you’d expect from such a melting pot of bitchiness there are plenty of viciously funny one-liners – many actually given to the totally bonkers social worker Pam (played for 100 per cent laughs by Jackie  Pulford), in the thickest of Irish brogues that sometimes swallows the punchline.

Jason, played by Wilson Armour has the biggest uphill struggle – we don’t like his overbearing yet closeted personality and for me he is way too young to make the age-difference storyline with Ollie work. Marcus J Foreman as Ollie provides not only youthful eye candy but also a touching characterisation of monogamous loyalty and a feeling he’s in the wrong relationship.

Eye candy too from the buff camp stud Garth, played for every ounce of flouncing and damaged Queerness by Daniel Breakwell. But for me the mega performance of the show is Josiah Eloi’s Max – his split-second and side-splitting asides, innuendoes and barbs are played with bravura, overlaying a kind of inner sadness.

In the finale, the holiday ends, relationships change, lessons are learned and we’ve had a lot of laughs along the way, not least from the scene-changes which are danced through by the cast. A great night out.

Alright Bitches is at Above The Stag, Vauxhall, London until 4 June.  Tickets abovethestag.org