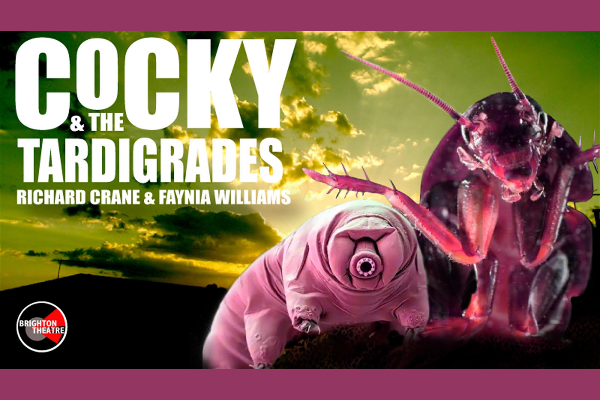 Brighton Fringe can often be educational as well as entertaining. And so it is with Richard Crane and Faynia Williams’ latest offering from Brighton Theatre. Welcome to the world of the tardigrade – also known as the water bear – a microscopic organism that looks like a sausage on 8 legs and which is practically indestructible.

This proves handy when it looks like mankind has become extinct due to nuclear war. Tardigrade Tamburlaine ( Grace Lovelass) is full of woe and foreboding and all for the species favourite pastime – curling up for eons till the trouble passes. But he/she is counterbalanced by Tinkerbell ( Sophie Bloor), an altogether more optimistic activist who disbelieves the Armageddon theory and sets off on her own voyage of discovery to find their natural enemy Cocky the cockroach ( Richard Crane).

It’s as crazy as it sounds, and it takes us through philosophical examinations of Schroedinger’s Cat, the beetle worship of ancient Egypt, climate change analysis and a few other matters that probably passed me by as I laughed at the absurdist nature of this piece , reminiscent of the Insect Play of the Brothers Capek from the 1920’s.

Sophie is enchanting as the innocent tardigrade and Grace’s operatic singing voice is an absolute surprise and a joy. Richard Crane is a sort of third Age hippy with cowboy hat and leather jacket to denote his roachiness. His laid-back wit is a great foil to the other characters.

Has the world ended or was it a false alarm and is there time for an unholy alliance between the surviving sub-species? I’m not telling.

Cocky and the Tardigares was at Latest Music Bar for its very short run.

For more shows go to brightonfringe.org