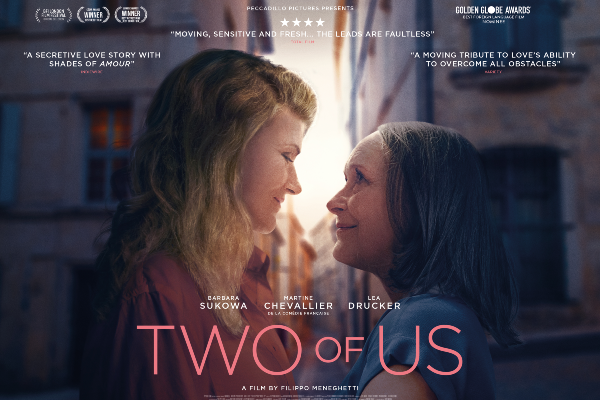 Anyone – me included – who’s had secret same-sex relationships , will be immediately on the wavelength of Filippo Meneghetti’s Lesbian romance Two Of Us.

The story at its basic level is about two older women who for many years have lived as neighbours in top floor Paris  apartments immediately opposite each other across the hall. Except  they don’t.

Unknown to anyone, Nina and Madeleine are a loving couple, totally devoted to each other and by and large living in the older Madeleine’s place.

But the apparent harmony of their loving relationship is torn apart when Madeleine has a stroke and her tetchy daughter and even ruder son turn up to take control of her care. Nina , distraught seeing the motionless and unspeaking Madeleine, cannot reveal the true nature of their relationship and has to embark on ever more frenzied attempts to get back into Madeleine’s life – and on one heartfelt occasion – her bed.

The physical decline of Madeleine is mirrored by a similar downward spiral in Nina’s mental state until she takes several drastic courses of action that bring the drama to a full-on crisis.

Barbara Sukowa as Nina is wonderfully detailed in the character’s decline and she carries us sympatheilly through every dilemna. Martine Chevallier is absolutely mesmerising, spending much of the film with no dialogue but her facial acting is a miracle to behold, conveying bewilderment, sadness and eventually some kind of fulfilment.

The cinematography is beautiful and haunting and the film has a very typical French feel to it – the clever use of a French version of the pop song I Will Follow You adding yet further  to the  pathos of the storyline.

More info or to oder or details to watch via peccapics.com