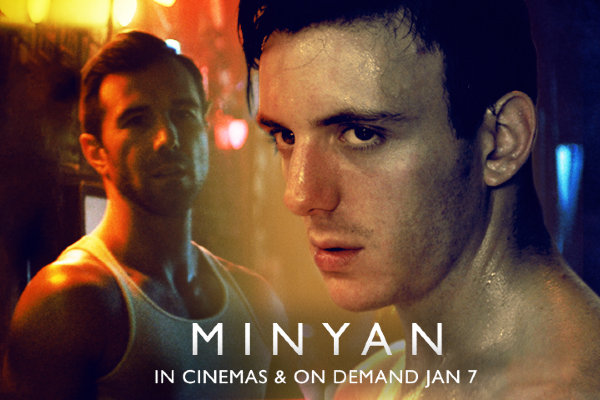 Eric Steel’s first feature film – Minyan – is an intriguing, complex and multi-layered examination of youthful risk-taking, of outsiders trying their best to survive as strangers in a strange land, of memory, wisdom, secrets and lies.

It has two distinct centres of interest, which overlap through the central character of the young David – played beautifully by the stage star of The Inheritance Samuel H Levine. David is from a family of immigrant Russian Jews who have settled in the enclave of Brighton Beach in New York- popularly known as Little Odessa.

David’s inner unhappiness and eventual outward rebellion against the strictures of a Jewish school, coincide with his growing awareness of his Queerness and the heady and hedonistic world of the East Village. But this is 1987 and as he discovers, AIDS is taking a toll of the Village people. When he starts a sexual relationship with a barman, he sees a list of names on the other guy’s fridge. It’s a tally of friends  who have got sick or died.

His unprotected sex with the barman, who eventually rejects David’s wayward drunken behaviour, is a symbol of the thrill-seeking and risk-taking, which seems to be part of David’s coping mechanism. The main story strand of the film is the tightly-knit Jewish community. When his recently bereaved grandfather (Ron Rifkin) needs a new place to live, there is wheeler-dealing to do with the head of a Jewish community home. David and grandfather Josef have to agree to join the minyan of the title – basically to make up the critical masss of ten people needed to join in pubic prayers.

It’s while setting up his grandfather’s new home that David meets Itzik and Herschel, two elderly Jews, both widowed and now closeted together in a loving relationship that’s a secret. When Itzik dies and Herschel is threatened with eviction because his name was not on the lease, David has to decide what really maters in his life.

The film has a raw, yet beautiful edge as it depicts Brighton Beach – a seaside anomaly in the Big Apple, and the ominous thundering of the elevated railway. Most of the characters have lies and secrets to protect, not least David’s father, who massages middle-aged women, with extras of course, and even the ailing Itzik whose past his embittered son cannot forgive.

Levine is mesmerising as the haunted, hunted David, never sure of himself or his surroundings, but there are electric performances too from Ron Rifkin as the grandfather and Christopher McCann as Herschel. It asks us many questions- do we learn from our past, are we safe in our fabricated community, how do we escape and explore our true nature and survive the challenge of being who we really are?

Minyan is in cinemas now. It’s distributed by the ever-wonderful Peccadillo Pictures.

More info on how and where to watch here