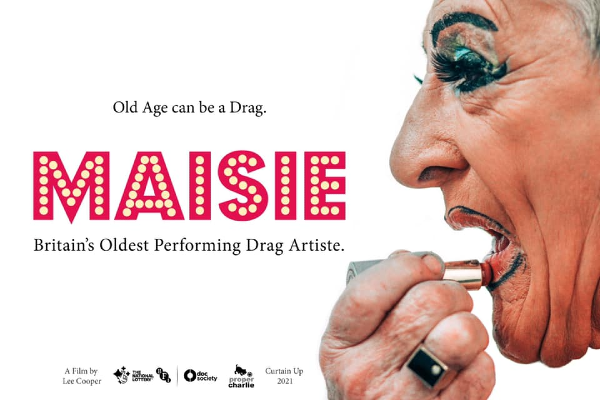 David Raven, aka Maisie Trollette is the subject of Lee Cooper’s fly-on-the-wall film leading up to the drag artiste’s 85th birthday.

That event was 3 years ago and the film is now getting its first proper showing in Brighton, where David resides, on November 9 for one night only.

It perfectly captures the glittering polished performance that comes out of chaos and mayhem in its dressing room preparation. Aided throughout by the stalwart theatre producer and friend Alan Cardew, we also have supporting roles for Brighton Drag Royalty Dave Lynn and Jason Sutton ( Miss Jason).

The film covers the week of David’s 85th birthday and includes a visit by the oldest drag queen in the world – 89-year-old Walter Cole aka Darcelle XV.

But before their encounter we get a small rehearsal of The Lady Is A Tramp from Dave, Jason and David -words are changed, words forgotten but there’s a real chemistry between the three performers. Sadly in the later film we don’t get this or any other full-length song – except in the finale. There may be performing rights issues – I don’t know – but it’s an element that’s sadly lacking.

So it’s high tea at what looks like the Grand Hotel on Brighton’s seafront, for David and Walter and it has to be said that David’s sarcastic and razor sharp wit gets the better of the American, who performs in his own club in Portland Oregon for 6 shows a week. The next scene I found the most interesting as the two drag stars put on their make-up and are helped to get their tights and frocks on. Maisie, as David now becomes, has the traditional make-up , reminiscent of a panto dame. Darcelle is outlandish, with huge Divine eye-make-up and a personality to match.

Darcelle tells us she’s a lip-syncer but sings live over the top of the backing – sadly again, when the film shows them at Legends on stage we get just a snatch ( no pun intended) of their act, though we do get a glimpse of Darcelle’s backside through her cut-away gown!

Asked who his idol was, David sharply retorts: “ I’m my only idol”, and promptly snaps the zipper on his brand new dress, but a spare is to hand. The backstage moments are for me the best in the film, bringing out his personality and independent spirit. Amid the seeming chaos of show prep, he says loudly: “ I hate not to know what the f…. Is happening”.

And perhaps the two most poignant moments of the film are when Jason Sutton tells us:” Maisie is David’s Saviour”, and then in an emotional finale, Maisie sings “ If I never sing another song” word and pitch perfect. The lyric continues: “ it wouldn’t bother me”.

Well David/Maisie it would bother a lot of us who follow and admire you – so to paraphrase Gypsy : “ Sing out baby”.

You can catch the film at the Duke Of York’s Picture House on November 9 and Maisie will be there to answer  questions. Book Tickets here