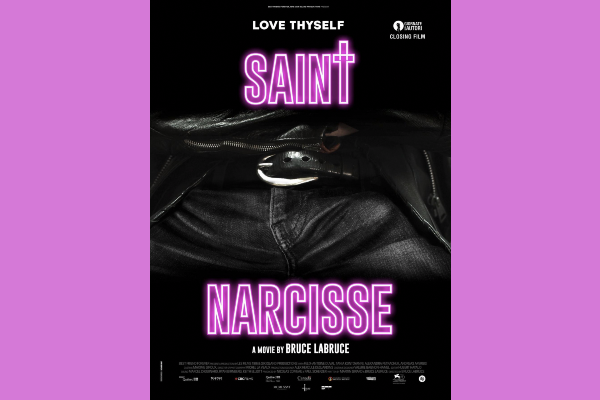 Canadian film-maker Bruce LaBruce makes no secret that a major theme n his work is sexual transgression and the genre of pornography. Saint Narcisse, which formed part of the Iris Prize LGBTQ+ film festival for 2021 certainly ticks those boxes.

We soon discover that Dominic was given away at birth, and that his mother Beatrice is still alive, living in some woods with a young girl who the story goes, never ages. Beatrice may be a witch, folks say. LaBruce now gets into his crazy stride: Beatrice is a Lesbian and her companion Irene bears a striking resemblance to Bearice’s previous lover Agathe.

This look-alike, Daniel, is totally controlled by the predatory monastery head Father Andrew ( Andreas Apergis),who believes Daniel to be the re-incarnation of Saint Sebastian, sent by God for Andrew’s’ carnal pleasure. It’s inevitable that the two D’s will meet, and equally obvious that they are identical twins.

What’s shocking is that their encounter leads to explicit, incestuous love-making – but it is beautifully photographed and initially you’re not sure if this is just another dream sequence. It’s not.

As the plot unravels, Dominic and Daniel move closer together and in a truly shocking violent denouement , Father Andrew’s fate is sealed. LaBruce takes the myth of Narcissus and his love of his own reflection to new heights.

Irene tells Dominic at one point: “ you’re so self-absorbed you see your likeness everywhere”. And that’s a clever trope in this film of suspense and contradictions. Felix-Antoine Duval is stunning to look at in his dual role of Dominic and Daniel, and hats off to the three body-doubles who make the encounter of the actor with himself easier.

You can watch it online till 31 October, on irisprize.org