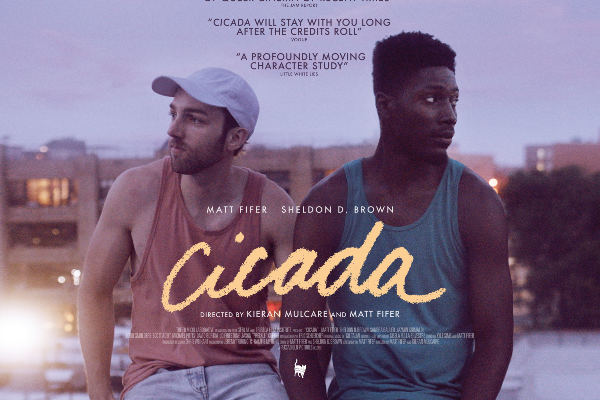 Written by its co-stars Michael Fifer and Sheldon D Brown, Cicada is a haunting love story about loss, abuse, passion, secrets and home truths that is simply stunning.

Fifer plays Ben, a 30-something New York resident who sleeps around with both men and women and whose life is haunted by a recurring nightmare from a childhood experience. Doctors are puzzled by a mystery illness and he finds himself in therapy for a second time.

But when he meets Sam (Brown) by chance at an outdoor bookstore, he seems to have found the real love of his life. There are prejudices to overcome, secrets the couple don’t want to share with their family and friends, and at the film’s centre genuine passion but also heartache.

Sam can’t tell his father, brought up in the Black church, that his son is Gay; he is also deeply disturbed by a recent incident in which he nearly died in a drive-by shooting; made all the more poignant because he thought the driver was following him to have sex. Ben can’t unpack his childhood trauma, but bit by bit we realise he was the victim of child abuse. This is underlined by radio and tv broadcasts of the trial against sports coach Jerry Sandusky, which was happening in 2013, the time when the film is set.

The angst of not being “out” to friends and family, plus a trauma which can’t even be discussed with anyone, the worry of too much commitment – these all ticked boxes in my life and I’m sure in many other viewers of this tender, caring and ultimately positive romance. And it’s staggering to realise it’s largely based on true events – including the near fatal shooting of Brown.

The Cicada of the title is a subtle metaphor only explained in the film’s closing moments. It seems this insect buries its eggs and the subsequent offspring spend 17 years underground before having a few months of love and procreation. Their hidden life then urge for love is what the film is all about. Fifer has a magnetic look, his eyes, often focussed somewhere else, his thoughts constantly haunted. Brown is strong, seemingly less restrained, but underneath deeply unsure. They are truly magnificent performances.

The film, co-directed by Fifer and Kieran Mulcare is in cinemas and on demand via Peccadillo Pictures.