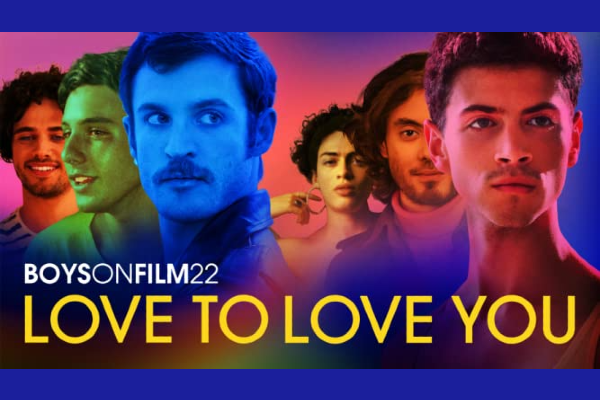 LGBTQ+ film distributors Peccadillo Pictures have come up trumps again with their latest compilation in their Boys On Film series. Love To Love You gives us 8 short films from the UK, Australia, Mexico and the USA. They’re a mixed bunch – some stunning, some perplexing but all interesting in their own way.

Have We Met Before is a somewhat psychedelic whizz through Queer history since the 1970’s, revealing  the ins and outs of the hanky code, cottaging, cruising and Grindr – the great impersonal equaliser. A bit strange but informative for a younger audience, I guess.

The Act centres on a dramatised Queer liaison at the time of the House of Lords debates leading up to the Sexual OffencesAct 1967. It puts the spotlight on police entrapment, on the inequality of what two Queer men might want from a relationship, and the dreadful ignorant rhetoric of some politicians of the day – fascinating, sad and a historical object lesson.

First Position is a beautifully filmed, tragic and poignant tale of a young ballet dancer who falls in love with a choreographer but is rapidly showing the signs  of Kaposi’s Sarcoma in 1980’s San Francisco. Its final fantasy dance sequence is absolutely breathtaking, with an outstanding performance by Anthony Sorrells.

Winter is a promising but disapppinting look at a young lip-syncing drag act who is reunited with his estranged father. I had wanted more and there is a longer exposition fighting to get out of this short.

The Suit Weareth The Man starts as a fairly mundane and over-obvious tale of corporate corruption inside a housing development company riding rough-shod over the poor residents who it dragoons to leave their properties. But suddenly we seem to be in a weird and whacky sex fantasy film complete with male rape and attempted strangulation. – I got totally lost in it.

Infinity While It Lasts is an intriguing love-at-first-sight story between two men, with the twist that one has huge sexual appetites and the other is asexual. A clever, complex and gripping story that again could go somewhere else with further development.

Finally, by far the best of this bunch is Thrive, starring the great talents of Taofique Folarin and Ben Aldridge, in a story of a Grindr  hook-up that doesn’t go at all where you expect it to. I’ve seen Taofique on stage, online and on film, and interviewed him for Scene. He combines a stunning muscular physicality with an emotional honesty in his acting that makes you always believe in the characters he is playing – usually vulnerable under a layer of fake confidence. Both actors are at the top of their game and its plot twist is unexpected but believable.

Boys On Film 22 is on most platforms and available through Peccadillo at peccapics.com