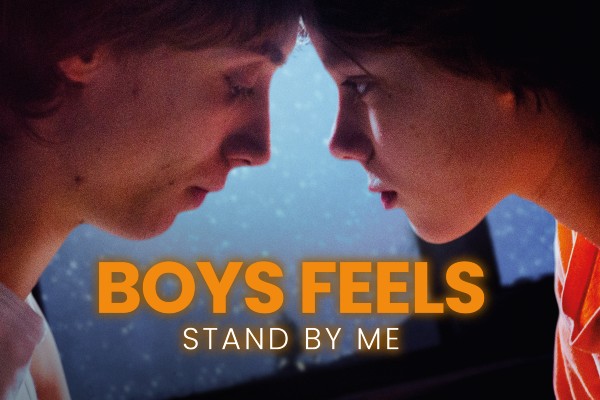 The latest film compilation from queer film distributors nqv explores the close ties between brothers and why its journey is not always plain sailing.

It Was Dark shows us 12-year-old twins Nicholas and Victor, who are very different characters at school. Nicholas seems to have a speech/personality problem that makes his voice ultra quiet and causes both ridicule and anger. It takes a shocking tragedy for Nicholas to realise what brotherhood truly means. Gripping and sad.

Suspendu is a beautifully filmed story of a boy aspiring to be a ballet dancer. When he’s beset by a painful injury on exams day at the conservatoire, he must decide if he can get through the pain barrier and show he has no limits. It’s absolutely mesmerising in its depiction of the poetry, brutality and perseverance of dance training.

Keep Going, set in Taiwan, gives us elementary schoolboy brothers Shan and Jia in a touching little tale of brotherly love, which has to cope with a third in the relationship – Shan’s female crush. It’s a story of cycling, signed baseballs, forgery and the beginnings of love.

Headbutt centres on the desire of 15-year-old Tobias to rekindle his close relationship with older sibling Lucas. It’s a film full of opaque symbolism and at one point in my estimation veers dangerously towards more than a whiff of incest. But make up your own mind – in any case the lava lamps look good.

In the film Out Of The Blue Mads is left waiting for a lift – yet again – from older brother Anders. When the older brother takes a detour to a drug den, things look like they’ll never be the same again.

And finally, the most intriguing of this pick is Mars Colony. Logan is a troubled and troublesome 16-year-old who reacts to the violence and lack of care from his recently widowed father by being an agressive and unruly pupil. His only interest is in the upcoming plan to send humans to colonise Mars. When a mysterious man appears, claiming to be Logan in 39 years’ time, who has returned from Mars to help Logan junior to save the planet – can it all be true?  It’s darkly funny and the comic chemistry between young Logan (Theo Van de Voorde) and older Logan (Philippe Rebbot) makes it well worth a watch.

The compilation is available on most platforms, from NVQ directly  and on PecadilloPOD.com