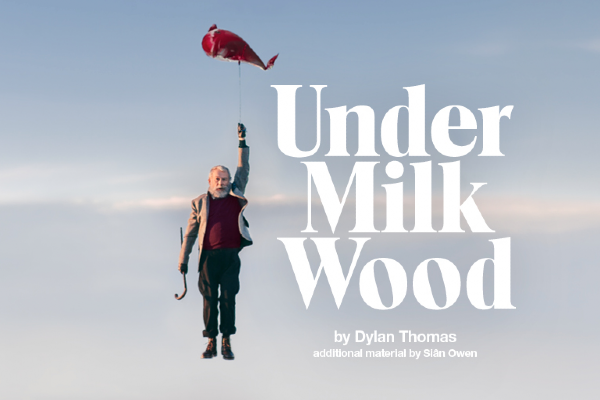 In staging Dylan Thomas’s radio drama, Under Milk Wood, the National Theatre has created a context in which the magic sound picture exists before our eyes. We are in a care home for the elderly , where the attentive staff minister to the needs  of the frail but lively residents.

Enter Michael  Sheen to see his estranged father. It’ s an awkward situation and Sheen’s character Owain Jenkins has something to get off his chest – something we never really discover. His father is silent but with a memory-jogging photo album , we go back in time to Owain’s grandfather, the Rev Eli Jenkins, and then bang Sheen starts the famous story as if to waken his passive father.

And so we are in Llareggub – Buggerall backwards – and the care home residents and staff spring to life  as Thomas’s cast of larger than life villagers. “To begin at the beginning”, Sheen’s narrator intones and off we go on a magical peep behind closed doors and the fantastic pen pictures of the residents.

And we love each and every one of them  from the blind Capt Cat talking to his long-lost drowned shipmates, to the slippery Mr Pugh , determined to poison his overbearing wife, and the infamous Polly Garter who can’t seem to stop having babies  to any man who comes along – the latter deliciously played by the wonderful Sian Phillips.

Over and over Sheen tells us that only we can see or hear what’s going on in this cycle of a full 24 hours in village life and death. Sheen loads his verbal gun with bullets so the residents can fire off some marvellously clever and funny one-liners – from “ the snuggery  of babies “ to “ your awful wedded wife”, and my favourite “I am a draper mad with love”.

And there’s Mrs Ogmore Pritchard who sees in bed every night her two dead husbands – and instructs them in their daily tasks: “and before you let the sun in, mind it wipes its shoes”, says the antiseptic-mad Mrs O P.

The timing  of this silver-haired ensemble is impeccable, and Sheen gives us frenetic nervous energy, a lingering uncertainty which is intriguing,  but his mastery of the Welsh poetry makes this an outstanding performance and joy to watch and listen to. Sian Owen’s extra care home dialogue works  as a vehicle to top and tail the show and has a strong lockdown resonance.

It’s a cracking 5-star show to kick off the re-opening of the NT . As it’s sold out I hope it’s filmed/streamed and preserved.