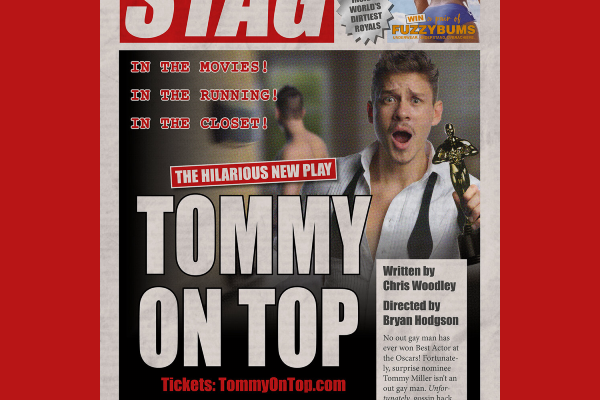 Chris Woodley has written an outrageous Queer farce with an underlying serious message – and it’s a hilarious triumph.

In a luxury Beverley Hills hotel room we meet Tommy Miller, tanned,buff, in his tight white CK undies, about to celebrate his boyfriend George’s birthday. So what ? Well, trouble is Tommy’s up for the best actor Oscar against Ben Affleck in 2 days.

And George is a secret because Tommy’s not out.

Fact:No out Gay actor has ever won Best Actor Oscar.

And Tommy’s camp queen of a manager Eddie is trying to cover up compromising photos of the couple kissing which are on social media. Add in Tommy’s feisty make-up influencer sister Molly, who seems permanently drunk, and it’s a heady cocktail for comic disaster.

Then there’s the totally vile, and loving being so, entertainment pod-caster Kiki, who turns up to get a confirmation or denial that Tommy’s Queer. And there’s possible new manager Judy, who has a solution to Tommy’s predicament. If the storyline seems explosive, so is the physical action in the play – lots of drunkenness, passing-out, people hidden in closets ( no pun intended), and a couple of falls from the room’s balcony .

It’s a modern take on a Feydeau farce, with Orton overtones and Bryan Hodgson directs it at the speed of an Olympic  100m sprint. The six-strong cast are all on top form – Megan Armstrong, with her vacuity as Molly, surprises with a right-on speech about Queer rights that earns her a round of applause. Chris Lane as Eddie couldn’t be more outrageously Queer and camp if he tried and his physical shenanigans are screamingly funny.

If Eddie and Molly get most of the comic lines, Lucas Livesey is exceptionally dry and sharp as the secret boyfriend George and both Becky Sanneh as Kiki and Bridgette Amofah as Judy are crucial to the storyline.

Alex Hulme as Tommy has a physique to die for, but his character’s dilemna is nicely nuanced and he pulls off the part with style.

So does Tommy come out ? Does he win the Oscar ? Well I’m sure you can guess and if you can or can’t don’t miss a joyous night at the theatre.

Tommy On Top is at Above The Stag, Vauxhall until 29 August