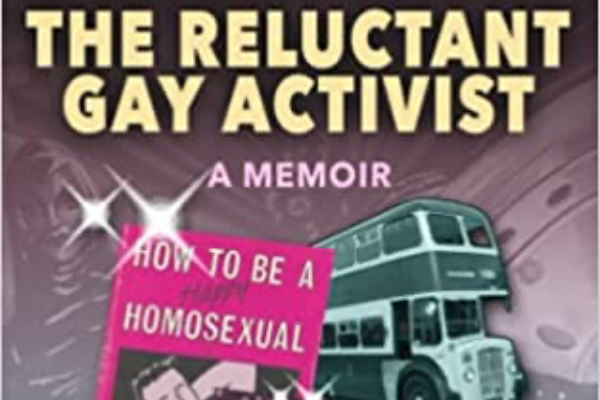 Sanderson, one of our National Treasures has published this revised memoir, in which he looks again at his very long involvement with equality campaigning and particularly the struggle for gay rights, of which he formed a key role and how his life as a leading secularist guided him.  I’ve got a lot of time for Terry, working class, poor, from a   Northern mining community, effortlessly kind and deliciously witty he’s a charming engaging activist who has never seemed to stop pushing for a better world. This book is a longer version of his previous memoir ‘The Adventures of a Happy Homosexual’ an covers Sanderson’s rather interesting life, from bold radical acts of coming out in a hostile UK society, building communities of Queers in Rochdale, working with Clare Raynor as an Agony Aunt on Women’s Own in the 80’s, being a leading writer for Gay Times and chairing the National Secular Society.

With honest eye witnessing we can feel some of the pain that LGBTQ+ folks suffered from a brutal Tory government, the horror of the impact of AIDS but also the deep warmth and generosity of Queer communities building something new, learning and adapting, building srong alliance and learning to love, fearlessly and without shame, and it’s here that Sanderson excels, his books, life and memoir is a shock wave against bigotry, smiting shame where ever he seems it, crushing the bigots under an unrelenting wave of love and holding out his hands to diverse communities, all struggling with oppressions, to create something better: the world we live in today, not perfect, but better.

The new additions bring us up to date with Sanderson’s struggle with cancer and his candid, searing account of facing pain and death are full of tenderness mixed in with a clarion call to us all about the threats our community faces and how our focused, joint resistance is vital and a duty of us all.