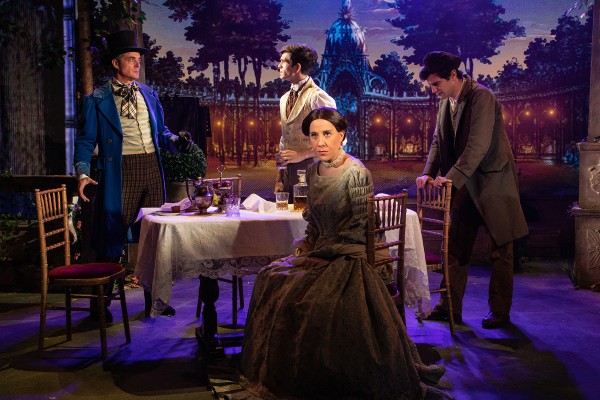 The wonderful Queer theatre Above The Stag is staging a marvellously entertaining musical play about the neighbouring  Vauxhall Pleasure Garden, set in 1853.

It’s a place for amusements of all kinds and especially discreet liaisons including with people of the same sex. It’s here that handsome young gardener Tom Reckless ( Sam Baumal ) falls in love with part-time poet and shipping clerk Ralph Pottinger ( Jay Worley ). But Tom has a second admirer – the lecherous but married Lord Lovelock ( Rory-Charlie Campbell ) .

In this Gilbertian world things are not always what they seem. Tom and Ralph have to keep their love a secret, Lord  Lovelock and Her Ladyship ( Ashleigh Harvey)  appear happily married but His Lordship is a self-confessed and proud sodomite. The garden’s resident hermit ( Steve Watts ) has a back door from his cave so he can go home at night. And the nightingale singing sweetly is a man up a tree impersonating the bird. And finally the exotic and mysterious Princess Saura ( Bea Amora Wong ) and the androgynous Capt Antrobus ( Jennie Jacobs ) are definitely living a lie.

It’s a heady mixture for what is apparently a light comedy but in its second half the world closes in; the gardens are threatened with closure and the full personal tragedy of the Crimean War comes home literally.

Taggart creator Glenn Chandler has written book and lyrics that have  great rhymes in the songs and many delightful and witty moments. Charles Miller’s music is never dull and it has touches of both G and S and even Sondheim, and every song takes the emotional story forward in a clever and engaging way. All the singers are top class but none more so than the male lovers whose voices are clear, bright and powerful.

David Shields has produced a masterpiece of a set, and coupled with George Reeve’s videography,  we are projected headlong into the gardens, up into the sky in a hot air ballon and to the front at Sebastopol. They are truly magical effects in so small a space.

Fenton Gray directs the piece at pace and Carole Todd’s marvellous choreography makes the most of the space while allowing the actors to stay in character in their movements- quite an achievement. The band- small but perfectly formed – under the energetic direction of Aaron Clingham gives the right Palm Court feeling to the evening.

Though the course of true love may not run totally smoothly, the Queer romance and the Trans sub-plot make this a show that not only entertains but has a message – fitting well with the mission of Above The Stag. The storyline is topped and tailed by a glimpse of the same location today as a noisy, unsafe building site, where Queer love can blossom. It’s a fabulous night of fun and thoughtfulness.

The Pleasure Garden is at Above The Stag until 17 October tickets at abovethestag.org.uk