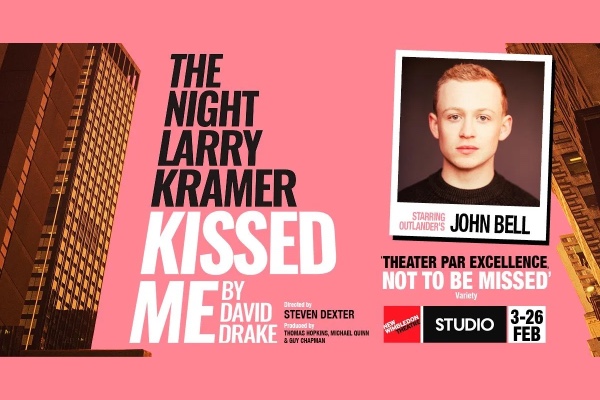 ”They’re all somebodies, searching somewhere for something”, David Drake’s central character tells us in his dark, funny, distressing and heart-lifting solo piece The Night Larry Kramer Kissed Me.

It’s Outlander star John Bell’s stage debut and what a stunning debut it is. At times playful, witty, at time bitter, angry and tearful, it’s a 60-minute barnstorming show of acting talent, that stops the heart, warms it and embraces it. It’s a totally committed performance rarely seen: honest, and full of raw passion and emotion.

We meet a young Gay boy who follows the bright lights to New York, with his passion for song and dance shows at the centre of his life. Coincidentally he had his 6th birthday the day of the Stonewall Riots, but it is his teenage experience of seeing a Chorus Line which leads him to identify with the Puerta Rican boy  in the musical who likes boys.

His second Epiphany is on his 22nd birthday seeing Larry Kramer’s AIDS-era play The Normal Heart – the kissing of the title is symbolic of the effect the show had on him. There follows a frantic, angry fruitless searching in the New York Times for news of AIDS-related deaths. To escape he goes to see 42nd Street, but the Lullaby Of Broadway song lodges in his head and becomes a kind of totemic representation of AIDS itself.

Many times this play has at its core poetic, musical, rhythmic, rhyming sections that give added emotion to the non-chronolological stream-of-consciousness treatment of the story. The character moves into activism with the Act Up movement, but also hangs out at the gym, with its pumping iron men both straight and Gay. He’s there, he tells us: “to tighten up my arse for the lover I don’t have”.

There’s an equally long and visually mind-blowing sequence at the bars/clubs, where the poetry of contact adverts is mixed with the display of coloured silk hankies – if you don’t know the significance- look it up ! And suddenly the stage is lit with countless candles, because we are at the endless AIDS vigils that became almost a nightly occurrence. He can’t absorb another memory because someone else is missing, he tells us.

And in the play’s final moments we see the character plain and simple, chatting to us, about the friends, lovers and neighbours he’s lost, and wonders where they’ve all gone. The answer in the final visual and poetic moments is that they have become “a thousand points of light”. It’s a highly emotive image that we take away from our theatre seats.

In conversation with John the following morning he told me he hopes this run is not the end of the show – maybe thinking it might go back to its 1990’s off-Broadway origins.

It certainly ought to find another outing for this young outstanding actor.

The Night Larry Kramer Kissed Me is at the New Wimbledon Theatre Studio until 26 February.  Tickets – atgtickets.com