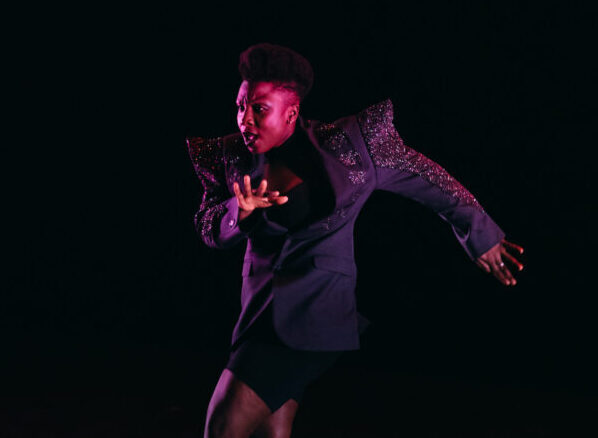 Alison Thomson’s review of the first piece to be performed in Brighton’s brand new The Dance Space.

The quirky duo that make up Thick & Tight put on a finale to remember at the end of a week of celebrations to mark the opening of Brighton’s premiere dance space. But these two are not just quirky, they’re super talented too.

In a show entitled Short & Sweet, that’s exactly what they gave us – eight individual pieces performed for our delectation, ranging from what I found to be a rather inaccessible and jerky opening of moths channelling Japanese Noh and Kyogen theatre, to the brilliant and hilariously unlikely pairing of John Cage and Elaine Paige that brought the house down at the close.

The duo behind this smart, funny, superbly executed show are Eleanor Perry and Daniel Hay-Gordon, graduates of the Rambert School who set up shop in 2012. Their pedigree is impeccable, and this show is groundbreaking and full of surprises, a real mash-up of cabaret, dance and drag – underpinned by a focus on queer culture and accessibility within dance.

If I found the first piece too dark and lacking sparkle, I was soon in my element with the light and pizzazz of both music and performance that was to come. Sid Vicious, Grace Jones, Boney M – as a child of the ’70s this was my era, but given a highly original and thoroughly modern spin.

There were several moments when I couldn’t help thinking this pair were the love children of avant-garde ‘ballet punk’ Michael Clark. Not least when Sid (‘He’s not vicious, he’s dead’) tore off his T-shirt to reveal a drug-scarred torso, and Rasputin (performed with gusto by Oxana Panchenko) tore off the bottom half of their greatcoat to reveal a big dick and a pair of fluffy balls. So that was why we’d been given the nod at the start that the Russian holy man was well-endowed.

This irreverent humour and provocative, in-yer-face attitude, backed up by classy choreography and a rich visual language, was Clark 2.0 – reminiscent of the man and his company strutting around bare-arsed in mad Leigh Bowery-designed costumes, at times wielding chainsaws, all to a post-punk soundtrack.

Short & Sweet is incredibly well thought-out – nothing is left to chance, however whimsical and light it might seem. There’s an intelligence and depth to every piece, as we flit from black-and-white movie references (The Manchurian Candidate) through a beautifully inclusive Ode to Edith Sitwell (with the joyous members of Corali, a leading dance company created by artists with a learning disability) to some hilarious lip-syncing – notably Curtain Lady, which had us in fits.

Clark, too, created short, punchy pieces, and his shows usually provided two intervals – he knew his audience and their attention span. Now Perry and Hay-Gordon have taken that to the next level, giving us the time lengths for each piece on our programme.

But there’s no time to lose focus here – each piece is fast-paced, dynamic and visually strong.

They saved the best till last – pairing Cage and Paige was a stroke of juxtapositionary genius, one an avant-garde composer, the other the queen of musicals, and yet they had so much in common – cats, chess, memories and more – or did they? Hay-Gordon particularly excels, playing coquettishly with his audience, who are rapt.

The Dance Space, Brighton’s first venue solely dedicated to dance in the new Circus Street development, opened on July 15, comprising studios, an event space, meeting and conference rooms that are all available to hire.

Arts charity South East Dance is the driving force behind the new space, which will offer dance classes, workshops and performances as well as play host to artists and choreographers creating and rehearsing new work.

Let’s hope that Perry and Hay-Gordon bring their unique brand of witty, intelligent dance back to Brighton soon.

Alison Thompson @AlisonWriter is a freelance writer and photographer with a passion for food, travel, fascinating things and the great outdoors.