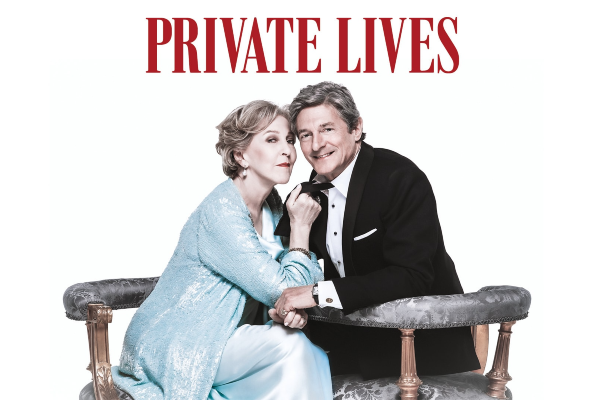 Private Lives, a comedy of manners by Noel Coward, sees a romance revisited between divorced and estranged Elyot and Amanda after they unexpectedly meet each other while both on honeymoon with their respective spouses.

These are sharp brittle people with rapier wits who replace the ennui of their lives with constant sparing.  The relationships, although viewed through the lens of this period piece  still resonated with the majority heterosexual audience, with a lot of laughter from people who may have seen the tensions, frustrations and coping strategies within their own long-term relationships reflected on stage.

The acting in this tightly written piece is wonderfully accurate and on point. Entitled accents, dreamily drifting around, privileged teasing, chauvinism and colonial arrogance are all on show, and skewered by dialogue and studied pose. There’s plenty of laughter, physical comedy and the funnies are delivered with style. I’d forgotten how nasty the play becomes in the end and there’s some brutal exchanges as the narrative moves on. Nigel Havers and Patricia Hodge sparkle and spark in their dueling, each as fabulously bad as each other, and each convincing in their portrayal of people allowing destructive battling passion to  rule hearts and minds. Natalie Walter and Dugald Bruce-Lockhart as the rather naive, younger and much less experienced respective new spouses, Sibyl and Victor serve up delightful anxious, whining foils. Aïcha Kossoko as the maid Louise brings big laughs to a small part and a touch of sophisticated sarcasm as ‘the help’ who’s seen it all, her eye rolling was perfect.

As an examination of a negative relationship generating long-term bickering and the decent into frustrations of hurt people who hurt people it’s fascinating, as a period piece of witty British theatre it’s delightfully and flawlessly presented and as some gently theatrical entertainment it still maintains its power to shine. This 90 year old script shows its age in places but with a slight change of emphasis some of the out of date attitudes are presented in a less flattering, daft light. A comedy should generate laughter and there was plenty of that at the Theatre Royal last night and the audience seemed very pleased with the performances on stage.

It’s interesting to note that Nigel Havers still generates a breathy appreciation from the female audience when he appears and his suaveness and charm is full beam from the off,  but the whole cast were received warmly by an audience.

It’s a three act play and works well in the theatre royal, the second set a breathtakingly beautiful piece of Parisian Chinoiserie and  Art Deco furnishings, lighting and decoration done with impeccable taste and period details. A really wonderful set which works to underscores the voluptuous decadence of these two wonderful dreadful protagonists.

The ending always feels a bit rushed, but here is done with perfect comic timings by Havers and Hodge, the ruthlessly polite exchanges of rigorous incivility over petit déjeuner seriously funny, followed by their tennis playing attention, sitting on the sofa watching with rising delight as Sibyl and Victor’s disagreement dissolves into vicious personal observations, spiteful abuse and ultimately violence is a highpoint of the show.

A period delight, executed with humour and panache and certainly one for Cowards fans or anyone interested in a certain type of arch, camp dialogue driven relationship comedies with a delicious vicious core.