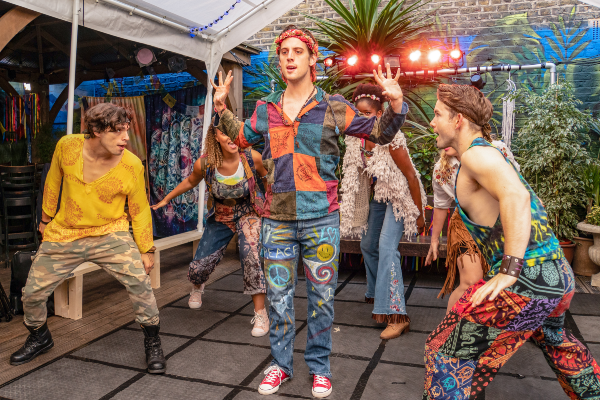 While the outside world depresses itself with talk of a second wave and lockdown, director Steven Dexter presents us with a 5-star piece of magical musical theatre in a pub garden in Vauxhall, London.

Stephen Schwartz’ s Pippin is  90 minutes of high-octane, energetic, escapist but thoughtful entertainment. Its cast of six, led by the highly charismatic Ryan Anderson, takes us on  a fantasy trip through Midlle Ages Europe at the court of dictator Charlemagne.

Our hero is on the archetypal quest to find happiness and fulfilment, and is stubbornly unfulfilled at every turn. On this canopied postage-stamp of a playing area with the masked audience on two sides, Nick Winston is the miracle worker of the show with his tight, athletic, balletic soaring choreography  that fills every available inch and comes right up to us with co compromises.

Don’t worry too much about the twists and turns of the plot – like the murder of the king and his subsequent “ un-murder” both at the hands of his son and heir Pippin. Sit back and let the company work its wonders as they do in the terrific Magic To Do.

Pippin is enlisted in a troupe of strolling players, led by the bluesy, sexy, mega-power house that is Tsemaye Bob-Egbe. She takes the roof off the garden tent with a voice you would hear all over Vauxhall.

The whole cast , doubling and tripling up are outstanding but mention must be made of what in normal circumstances would be an award-winning performance  from Joanne Clifton as Pippin’s mother and grandmother. She is feisty, outrageous and hugely entertaining, also with a powerhouse of a vocal range.

MD Michael Bradley takes the singers along at a breathtaking pace and Ryan Anderson  as the druggy, hippy Prince without a purpose is absolutely electric. His mesmerising smile and total commitment to the action and the other characters is quite amazing.

The show, which can only play to 50 a performance has had its run extended twice and it’s got to be found another home- indoors if possible –  where many more can enjoy what Schwartz calls this Cormer Of The Sky.

It can’t be stressed too strongly how marvellous the Eagle team are at keeping the audience and performers safe and secure. Theatre owners about to re-open could do worse than go check the Eagle’s safety procedures. They are amazing.

Pippin is  produced by Peter Bull for LAMBCO Productions. It’s at the Eagle until 11 October – ticket information at pippinmusical.co.uk