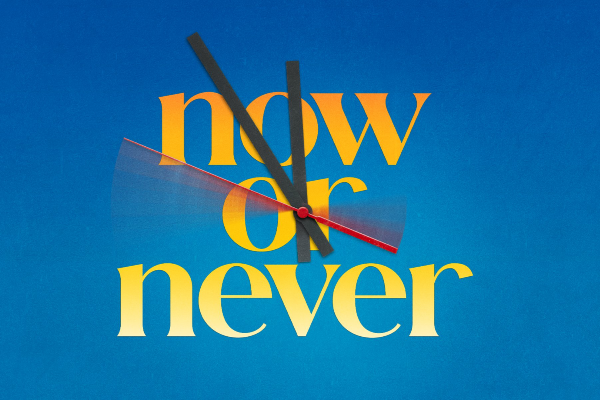 You’d think that while we are still in lockdown that the least attractive performance would be a song cycle about the end of the world as we know it. But strangely Matthew Harvey’s Now Or Never is a wonderfully upbeat  and life-affirming set of songs live-streamed in one take in the nooks and crannies of Cirencester’s Barn  Theatre.

I shouldn’t have doubted for a second that it would be brilliant – this is the theatre that gave us a mesmerising modern take on Dorian Gray , and this 30-minute piece disappoints only in that it’s too short for my liking. Digital creation is by Ryan Carter and he makes magic out of this on the hoof film/theatre piece.

Framed at either end by an earnest newsreader played by Janie Dee, we’re told that an impending solar flare is hurtling Earth-wards and there’s 7 days left to live.

Given that premise, Harvey crafts interesting characters who each have a positive to-do list with a week to go.

Harvey himself is a motorbike fanatic who yearns for the open road – wherever it goes. Katie Shearman is delightfully gleeful at the prospect of finally getting a dog – well or maybe 12.  Her clear, bright voice sits easily on this comic song. Lucy St. Louis is a novelist with 10 books behind her, determined to finish this final one – “ give me the words to give you the end you deserve “, she sings to her manuscript or to her imagination: it’s not clear which.

Irvine Iqbal is a regretful older man who writes a good old-fashioned letter on paper to his past love, “ forgive an old fool”, he writes/sings : “ I should have taken your hand…in case there’s no next time, I need you to know.” It maybe pointless as a gesture but it’s a haunting love song.

There’s no weak number in this piece and the finale, with all 7 characters on the Barn stage telling us that whatever’s next “ today is for the taking. The silver in the clouds is hidden in the rainbow”.

I assume the Barn recorded this livestream and it really ought to have two futures – a recording made available for a wider audience, and a longer version. It’s a 5-star triumph that could go far.

Does the world actually end ?

Catch the show next time it’s available. Scene will let you know when it screens.