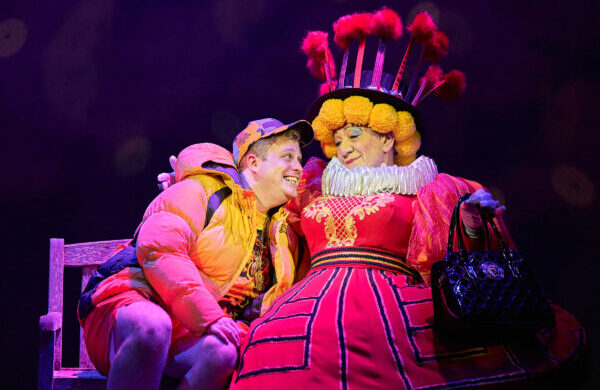 If you want a supreme acting masterclass, don’t trek to Stratford-upon-Avon or the National Theatre; go see Sir Ian McKellen at the top of his game as Mother Goose.

I kid you not, it’s a showcase of comic timing, deadpan reactions and emotional honesty – you won’t see a better Christmas show anywhere.

The panto opened its four-month UK run at Brighton’s Theatre Royal and is now heading for London’s West  End before a long tour around the UK right up to Easter. McKellen has defined the finest roles on stage and screen for over six decades, and he breezes through this show written by queer playwright Jonathan Harvey, who penned gathering ground-breaking Beautiful Thing and has created over 300 episodes of Corrie. He gives us a morality story about the downsides of fame and fortune, and there’s a lesbian wedding to slip in before the finale too!

Mother Goose is an unwitting pawn in the battle between good and bad fairies Encanta (Sharon Ballard) and Malignia (Karen Mavundukure), who we love to love and hate respectively. When the evil energy company threatens to evict Goose, husband Vic (John Bishop) and son Jack (Oscar Conlon-Morrey) and their army of waif and stray animals, they are rescued by the golden egg-laying Cilla Quack – an outstanding performance from Anna-Jane Casey.

Comedian and Dr Who assistant Bishop is a solid support for McKellen’s crazy antics, and Oscar’s Jack is a brilliant pen picture of a really stupid boy who we absolutely love. His comic timing equals McKellen’s.

The songs and dance routines raise the rafters and Cilla’s Don’t Rain On My Parade is an absolute blockbuster number that sends the audience wild.

Cal McCrystal’s directions is at a pace, clear, dynamically exciting and breathless. Harvey has some great one-liners for the theatrical Knight and he doesn’t miss a beat in delivering them. There are Dr Who, Gandalf, and topical political gibes; there’s innuendo, political incorrectness and a happy ending – what more could you ask?

All pics by Manuel Harlan