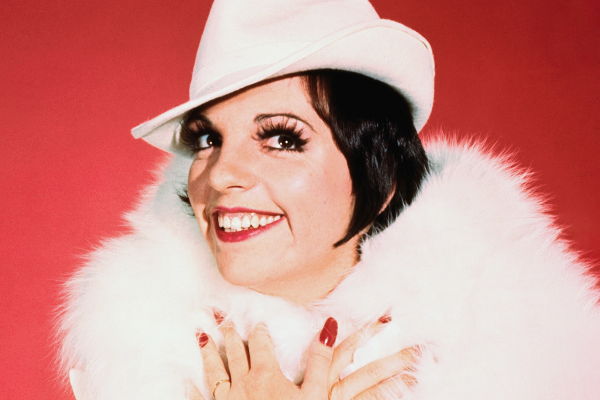 Hard to believe that Liza Minnelli won her first Tony  at the tender age of 19 or that it’s nearly 50 years since the stunning film version of Kander and Ebb’s Cabaret.

But then it’s all hard to fathom that its superstar has just turned 75.  Daniel Nardicio made sure it didn’t go unmarked by conceiving and producing A  Love Letter to Liza, which brought together and into our living rooms, stars of stage and screen to pay homage to the lady.

As these things go it was not the normal big stage big orchestra glitzy affair she deserves, but a much more one-to-one set of tributes from the likes of sister Lorna Luft,  her Cabaret co-star Joel Grey and long-time friend and champion of the Great American Songbook Michal Feinstein.

It’s easy to forget her formidable number of shows- from the Fantasticks, through Pyjama Game, Chicago , The Rink, Victor/Victoria , Flora The Red Menace to Liza with a Z.

Though the spoken tributes were endearing , for me the highlights of this 2-hour show were the singing contributions. The unbeatable Lea DeLaria  sang a great scat version of Everything I’ve Got Belongs To You every bit as good as Ella would have done it.

Kristin Chenoweth admitted she couldn’t  believe she had the guts to give us Maybe This Time , but it was sweet, powerful, with a hint of craziness. Joel Grey sadly only gave us a few bars  of Wilkommen but there you go. But Haley Swindal was funny, clever and gripping in the Kander and Ebb song Say Yes with its soaring drama.

Ute Lemper was at her sultry cabaret style best in the title song from Cabaret and Joely Fisher and Ava Delany  duetted marvellously in Get Happy mashed with Happy Days Are Here Again. We had  a teeny tiny glimpse of Liza on video singing Some People – but not nearly enough, and she didn’t make a real-life appearance in the show.

But wow her long-time arranger Billy Stritch gave us a  bluesy, sexy version of Teach Me Tonight worth the admission price alone.

Vintage hoofer Ben Vereen sang and sat it out while dancers from the Verdon/Fosse Legacy stepped out for Bye Bye Blackbird .

And the show was topped off by two great performances – Michael Feinstein with Old Friend and the sexy, cheeky Seth Sikes on the beach at Puerto Vallarta  with a Queer rendition of Ring Them Bells.

A night to remember and a life to celebrate.

The organisers tell me there are no immediate plans to release the show further but they really should. Details of the night here.