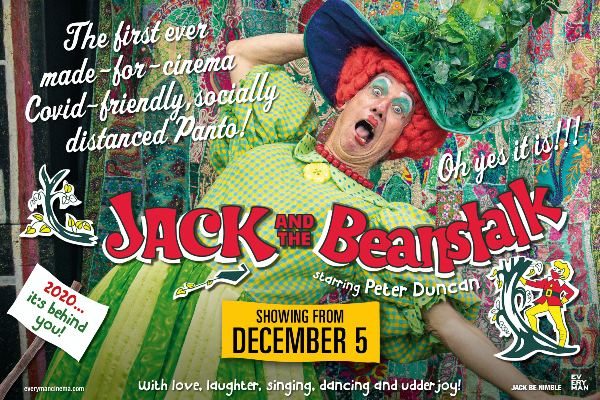 Peter Duncan’s brilliant panto filmed in his South London garden is a sure-fire crowd pleaser. Directed by Duncan and Ian Talbot its production qualities are of the highest order – which is why this week it also finds itself in two chains of cinemas along with the home-streaming option.

From the moment the feisty no-nonsense Garden Fairy ( Nicola Blackman ) regales us in rhyming couplets you know this is going to be traditional knock-about stuff.

No corners cut in  this traditional rendition – Covid jokes abound, and the songs are a delight to hear – especially those by Jack ( Sam Ebenezer ) and Jill ( Sarah Moss) – both lovers have charming voices that put no strain on the ear.

Duncan plays his evergreen role as the Dame with a winning smile and physical agility and ofcourse every time he makes an entrance it’s  in a more outlandish frock and wig than the time before. Talbot is a blustering but loveable Squire but the highlight of the company for me is Jos Vantyler’s absolutely vile Fleshcreepy , adopting various disguised accents, leering at us in his child-catcher’s lookalike costume and being very hissable.

Duncan and the productions company have pulled out all the stops and the garden is a real delight and a change from standard panto scenery – and yes there’s a huge beanstalk which Jack and Damne Trott climb and a very impressive giant – God knows what Duncan’s neighbours must have thought during filming.

There’s prat falls, chases, and even a farting cow and a wolf  beast to entertain viewers of all ages.

So why do cows have bells ? – Because their horns don’t work…and as Dame T says ‘ we’ll live in penury – it’s near Tunbridge  Wells “  I’m sure your get the idea. There’s plenty of opportunities for participation by audiences at home,  and a great sing-along song to raise your winter post- lockdown spirits.

Tickets  for Jack and the Beanstalk from pantoonline.co.uk