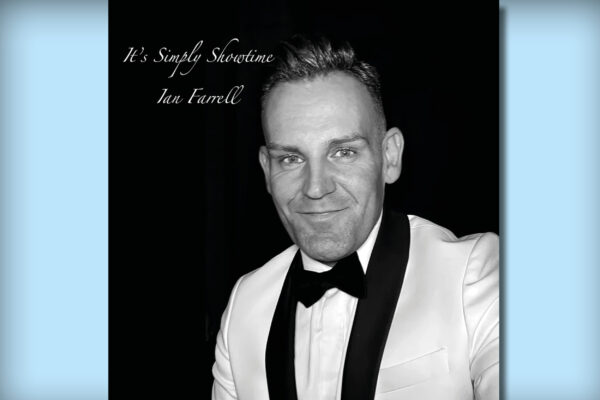 Never one to let the grass grow under his feet, Brighton-based tenor Ian Farrell is back with another album, this time focussing on the world of musical theatre. It’s Simply Showtime features ten tracks, some well-known and a few lesser-known gems, with a common strand of hope and the search for self-belief running through the collection.

It was back in 2020 just before things went crazy that Ian released Ten for Ten, celebrating 10 years of being sober. A global pandemic didn’t stop him, with il Significato di te showcasing classical repertoire following in 2021.

This new album is his most accomplished to date, demonstrating the strength and range of his voice in the musical theatre repertoire, showing strong technical command in some tricky songs here. But it also feels the most intimate album to date – despite some big numbers, Ian’s approach is definitely to draw us into the world of the songs, rather than bombard us with glitzy showtime alone, despite the album’s title.

So for example, Somewhere (from West Side Story) is not belted out as it often is, and this is a more contemplative reading, building gradually to the final climax, with stronger understanding of the song’s shape. Ian also talked to me about the broader meaning of the song, and that it can be interpreted as being about anybody who is struggling to find their place in the world, particularly relevant for all of us in the LGBTQ+ world today.

This is echoed in the dark longing of She’s a Woman from Kiss of the Spider Woman, the longing quest for love in Ian’s voice in Where is Love (from Oliver!), and more searching for a place in life in the deceptively perky Corner of the Sky (from Pippin), with a spectacular closing high note from Ian.

Bring Him Home from Les Misérables opens the disc, and Ian’s reading of this classic has incredible tenderness, with some beautifully floated high registers, especially on the final extended note. Again, this can often be delivered as a straightforward belter, but it is all the more effective when controlled like this. Again, it is with touching tenderness that he takes us on the journey of the classic Send in the Clowns, full of introspection and reflection on disappointments of the past.

Ian draws on Billy Porter‘s wonderful rendition of On The Steet Where You Live (from My Fair Lady) for inspiration, yet he gives the familiar lines his own individuality and control, as well as a glorious melismatic climax. Tomorrow (from Annie) is generally not one of my favourite songs, often too saccharine and rather trite, but here Ian gives it a slow, introspective ‘lounge’ feel, which works very well, giving the song more nuance.

But the two numbers that stand out for me are Let me Fall, from Cirque du Soleil‘s show, Quidam, subsequently covered by Josh Groban, and the track that ends the album, You Will Be Found, from the musical Dear Evan Hansen. The former is all about taking risks and being allowed to fall, and taking chances – clearly carrying a double-meaning for Cirque du Soleil‘s highwire acts, but also life in general, and something that clearly has echoes for Ian.

And it is in this song I hear his fullest expression, with power at the top of his range, and defiant strength throughout. That same depth of emotion is expressed in You Will Be Found, with its message of hope, again following on from that sense of searching expressed in Somewhere.

It should also be mentioned that Ian is accompanied throughout by Joss Peach (josspeach.com), with some great piano and instrumental arrangements perfectly echoing Ian’s intimate approach.

The album is available to download for free from his website (although financial contributions are welcome), and CDs are available on request. Ian’s plans for 2023 include getting out there and performing live, hopefully appearing soon in Brighton and London – so watch this space for dates, and check out his social media links for more info.