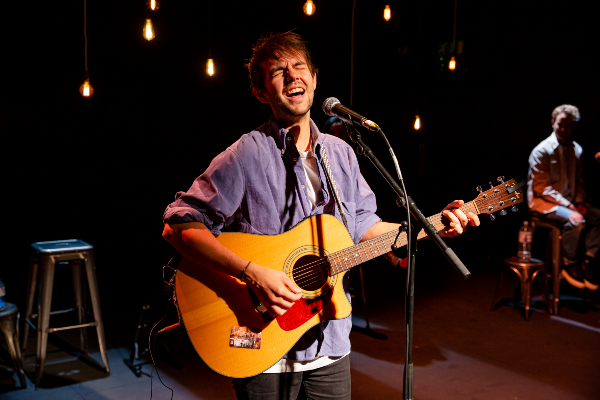 Staged at Southwark Playhouse , Fiver- the Concert is co-written and co-directed by Tom  Lees who is also its MD.

Its five performers, including  Alex, take on a number of roles to tell a stream of personal stories , all connected by the passing of one £5 note from character to character.

There are stories of the first blooming of love, of the ending of an affair, of shaky romance, of loss, reconciliation and true friendship – and they all hang by the delicate thread  of Alex’s clever, sad, funny and sharp lyrics and bouncy tunes.

Less successful for me was a secondary plot of obsessive stalking and inappropriate love by a teenage pupil for  their hapless teacher. This is a frightening story that deserves its own development and outing as a separate work. Here, told  through increasingly manic letters, it has little  to do with the primary narrative.

In the bare Southwark stage, and socially distanced, the characters still manage to play off each other and the many solos and  duets never fail to please. It’s a clever cyclical device and though you can probably guess the outcome, there are lots of delightful diversions along the way, over a 15 year time span.

The cast excel in their many roles – Alex as the central busker/narrator, Luke Bayer as a delightful youthful lover, with a clear and sweet top vocal range, Dan Buckley with a fine line of Glaswegian humour, and Aoife Clesham and Hiba Elchikhe as the various female love interests, with powerful voices to die for .

When I talked to Alex recently he said the next project was a cast recording and I for one would certainly like to hear the songs again. Let’s hope when live audiences come back that the show will get another fully staged production. It deserves it.