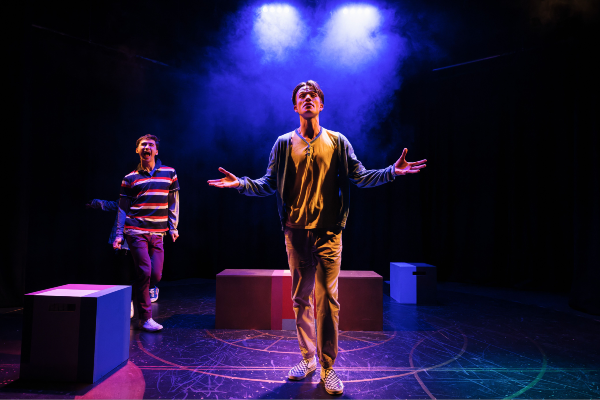 What if your first attempt at teenage Gay romance doesn’t work out – mainly because your on-off boyfriend kills himself? Well, you turn back time – which is possible if you are a massive Harry Potter fan and have a time turner.

And if it still doesn’t quite come out right, you just give the mechanism another few turns and start again, age 12. This is the clever premise of dark comedy Dumbledore Is So Gay, by Robert Holtom. It’s a Queer coming-of-age play where our young hero Jack, played with bouncy, smiley ease by Alex Britt, falls in love in a French lesson with school mate Ollie, played with gruff bravado by Max Percy.

There’s the added complication of a Hermione-figure in the shape of Gemma, played with 110 per cent Black girl-power energy by Charlotte Dowding.

The starting point for the play and its title is the admission by J K Rowling, after the final Harry Potter book was written,  that the late Hogwarts headmaster Dumbledore had been Gay.

Each turn of time episode brings new solutions and new problems and Jack’s two mates also double as Jack’s parents who struggle to cope with his Queerneess. Tom Wright’s direction is fast-paced and uses the limited acting space to maximum effect.

There’s an underdeveloped sub-plot about Old Norman – a scarcely known neighbour who is the butt of homophobia, but turns out in the final re-statement of the storyline to be a notable local activist in the Gay Liberation Front. With a running time of just an hour, there’s room for the play to be further developed, other characters fleshed out and a more well-rounded whole to be produced. But director Tom Wright creates a highly physical and emotionally-charged production and we pretty much love all the characters.

And Jack is probably the cutest Hufflepuff you’ll come across.

Having featured at the Vault 2020 Festival , I’m sure the play will get further outings – if you’ll pardon the pun- because it’s both enchanting and enchanted.

The play ran at the Pleasance, London from 21-26 September.