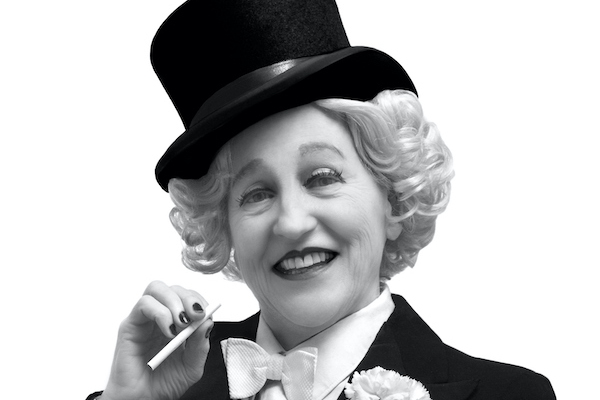 As LGBTQ+ icons go there are arguably few who are more glamorous and trailblazing as Marlene Dietrich. This is all the more remarkable given that Dietrich was a major Hollywood star in her day, in spite of, or maybe to a large extent because, she was a cross-dressing superstar who flirted with both men and women in her films and on stage. But what is the story behind the icon?

In Patricia Hartshorne’s intimate and charming one woman show which has just finished a run at the New Steine Hotel, we got a fascinating and personable glimpse at the remarkable life of Dietrich, showing how the superstar was as strong, unapologetic and uncompromising in her private life as the mysterious and charismatic femmes fatales she played on screen.

After introducing herself as narrator, Hartshorne explains how Dietrich shot to international fame as the decadent cabaret singer Lola-Lola in the German film Der Blaue Engel (The Blue Angel) and was subsequently signed to Paramount Pictures.

We learn that in Morocco, her first Hollywood film, Dietrich is again cast as a cabaret singer and, with the help of a wig and a hat pulled from a suitcase placed centre stage, Hartshorne gently talks us through her transformation into her vaunted protagonist. It’s a magical moment as the change takes place before our eyes, and as Hartshorne re-enacts the song Quand L’Amour Meurt from the film, the likeness to Dietrich is both striking and moving.

As the show progresses Hartshorne pulls more props from the suitcase as she treats us to faithful renditions of other Dietrich classics such as Lili Marleen, La Vie en Rose, Die Fesche Lola, Boys in the Backroom and of course the iconic Falling in Love Again.

Along the way we hear about the ups and downs of Dietrich’s personal life and her marriages and many affairs with both men and women. But we also learn about her compassion and strong political convictions, her work to help Jews and dissidents escape Nazi Germany, and how she personally even stood up to Adolph Hitler. We also learn how in her later years she became increasingly reclusive, as the striking looks which helped thrust her to fame faded. It all makes for a compelling and poignant narrative.

But this is ultimately an uplifting and funny show. Hartshorne draws comedy from the fact that Covid restrictions and a dreaded council risk assessment (or should that be risqué assessment?) mean that she can’t be as physically playful with her audience as her alter ego Marlene might want.  She also uses the restrictions as a comic hook for having to carry out her own lighting and sound production during the show, so if things don’t always go exactly to plan it becomes part of the over-arching story about how the show has come to be. It’s all clever and endearing.

This is a saucy, sassy, witty show that is also informative, moving and of course full of great songs, and Hartshorne’s admiration and affection for her muse is palpable and heart-warming. It makes for great cabaret and a thoroughly enjoyable evening. Catch it next time if you can.