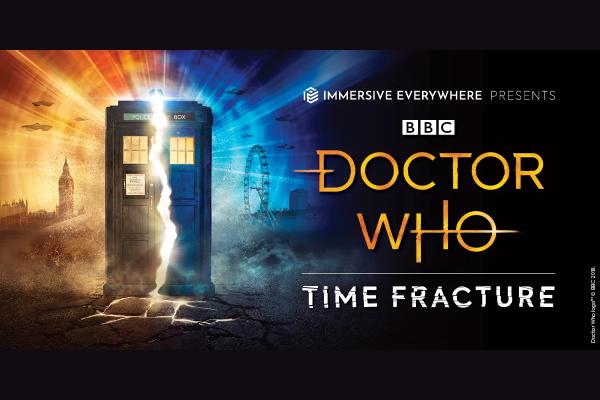 Time Fracture is a fully immersive, very Queer freindly space where you can discover elements of a Dr Who storyline and see a host of your favourite aliens, characters, enemies and monsters.

To talk in detail about what happens at a good immersive experience always spoils it, so I’ll not be doing that. It’s easy to review a show done so well, with a committed quick-witted cast who all work hard to ensure that everyone is included, but not hassled into taking part. If all you want to do is watch it happen around you, then that’s possible, although my companion, (who had said that’s what he wanted to do), was soon swept up into the action by his own enthusiasm and some gentle encouragement from the charming Gallifreyan guides.

There are some peculiar elements in the event, but then Dr Who is a pretty odd show in the way it often deals with moral and emotional problems that can’t ever have an easy resolve. Time Fracture sticks with that, so don’t expect an easy answer in this show, but do expect to be challenged and have to do some thinking about what you will (or won’t do) to save the Universe.

Costume and sets are fun, with superb attention to detail papering across the faint cracks, high production values always help tip the audience over into participation in any kind of immersive experience and in a world like Dr Who where people are often passionate fans with deep connections to the places, plots and characters presenting them in an engaging way will help support a fun experience.  After an intro, and some frenetic scene setting,  we all make choices on where to go, ending up in a different part of the story which quickly start to melt together. This is done with humour but with a real narrative tension, keeping us focused in having to discover what’s happening and finding out the ‘thing’ that need finding.  There’s a large off-world market ( with a bar)  full of characters  from the last 15 year of Dr Who, who all may, or may not, hold important elements of the plot.

It’s gloriously confusing chaotic fun,  the well-trained team gently helping the action along, making sure everyone feels included and getting a few key folk to engage more deeply.   There’s an odd lack of agency here, but as most of the folk were invested in the Dr Who universe this didn’t appear to be too much of a problem for them, but it annoyed me slightly as the experience continued.

I really enjoy teasing actors in character in these immersive experiences, I was impressed by the quick-witted improvising skills of some of the crew, the Sister of Khan was a wonderfully unrufflable engagement taking all the daftness thrown her way and rolling it back, all wrapped up in the timey wimey nonsense. Delightful!

Half way through the show there’s a break,  we are gently moved into the next space, and basically locked into a large intergalactic bar for some real drinks and toilet stop, it’s an interval with a show!  As the bar jumps though space we get serenaded by two blue glittered singers who were exceptional. We sipped a cocktail and singers Imelda Warren Green and Khadija Sallet seduced us with their amazing range and emotional connection. A lyrical languid smoky blues version of Radio head’s ‘I’m a creep’ really impressed us.  It was an unexpected treat to have such superb singing thrown in alongside the Whovian fun and really added to the value of the experience.

My companion; a newish Whovien (who sports a rather flashy tattoo of the Tardis swirling though the time vortex on his calf) enjoyed himself. Felt confident to take part, and engage with the characters, plot and often pointed out details that he’d noticed.  There were some Old Skool Dr Who fans, people up for silly fun, Super Fans- their gaspingly delivered knowledge of intricate plot detail was handled deftly by the (outclassed) actors and a few young people. This wide range of experience of the Whovien universe is knitted together by talented space management, plot development and keeping groups small and in touch with a key characters.  We all did different things, had different experiences, but in the same spaces. When done well immersion is exciting, TimeFracture is genuinely thrilling. There is always a nagging feeling of missing out, when so much is happening around you.

For the finale we are all brought back together, with our different worldviews, depending on our journey through the different worlds. This sets up a final audience experience which has a wonderfully empowering (and soppy) pay off.

In fine Dr Who fashion we find out that what we need has always been part of us, and our journey has only made us stronger. It’s a lovely dénouement, with more than a nod to the cultish nature of the fan base, I wondered as I chanted for a rather dark scenario of universal annihilation if this was really what I’d signed up for.  It all works out in the end – of course – this is Dr Who so there’s no spoiler there, but there are some light scary moments and we jumped out of our skin once.

At the end we get to wander around part of the set, grab some photos ( all photography and filming is banned throughout the experience which not only keeps the action secret but also stops a lot of daft posing around. ) it’s a gentle way to wind down after a  tense two hours storytelling, packed with interest.

TimeFrature is a stand out experience for any Whoovian in your life, it’s all helped along by some cool screen based appearances from the 1st and current Dr, which allows a charming contrast of personality and Galifrean psychology, and almost all of the other previous Dr’s make some kind of onscreen appearance. This is a fun event for anyone who enjoys being thrown into a well-crafted world, or rather 17 different worlds with 13 possible storylines populated by believable, well-acted characters living in a real-time space created with attention to detail. As you’d expect it’s an inclusive show, very Queer friendly, disability inclusive and with care given to include people who may be shy or need some extra discreet support to get the very best experience.

We left happy, grinning into the bright spring sunlight, thrilled by seeing Cyberman, Daleks, a rather fun Ood and a range of more creepy Dr Who aliens……. whatever you do, don’t blink!

The show is extending its successful run now through to September 2022.  For more info or to book tickets see the website here