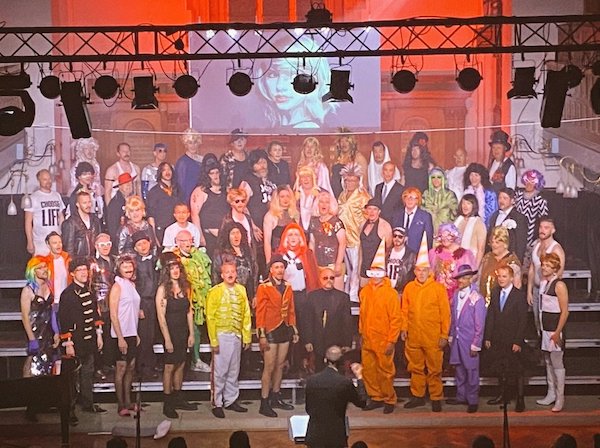 Well, if Friday’s concert by Brighton Gay Men’s Chorus (BGMC) at St George’s is anything to go by, this year’s Brighton Fringe will be a winner. Adventurous, experimental and in full, rich voice (lack of tenors was a disappointment occasionally), the Chorus treated us to songs old and new as well as encouraging members to take on the nerve-racking responsibility of solos.

The subject was Divas! and I was expecting all songs would have been originally by women (currently a trend in cabaret) but the Chorus chose to add some males. While you could argue that more women could be represented (Adele, Streisand, Garland, Simone…), the (slightly confusing) highlight was the Elton John and Freddie Mercury section with clever use of song titles.

Pace and vocal energy are so important in comedy sketches and the Chorus must be congratulated on trying new approaches. It was a full show so I can only mention my personal highlights.

Firstly – Andrew Farr as Piaf, which was a masterclass in detail and emotional stillness, followed closely by Jon Taylor with It’s So Quiet. Jon showed, as always, great comedy skills and dynamics. I also, particularly, liked Jolene (Keiran Moore) and You Don’t Have to Say You Love Me (Charlie Bedson).

Tim Nail’s arrangements are legendary – too many to pick out and it was great to have piano only rather than mixing with track. Lighting was more subtle than usual and complimentary (apart from the occasional splash of green on faces!). Sound was excellent – just one little hiccup with Sadao Ueda’s mic in Love in the First Degree, which had excellent choreography performed by Declan McChrystal, James McGoldrick and Sadao. Vogue, on the other hand, was a little ambitious and reminded me of the mantra ‘less is more’.

Musical Director Joe Paxton led modestly with precision and verve and the costumes for Act 2 were fantastic – a rainbow of Divas from Ed Sheeran to the Greatest Showman on Earth!

A warm and concise appeal by Laura of Allsorts Youth Project (the chosen charity) completed a professional and entertaining evening… We are so lucky to have all this talent in Brighton!