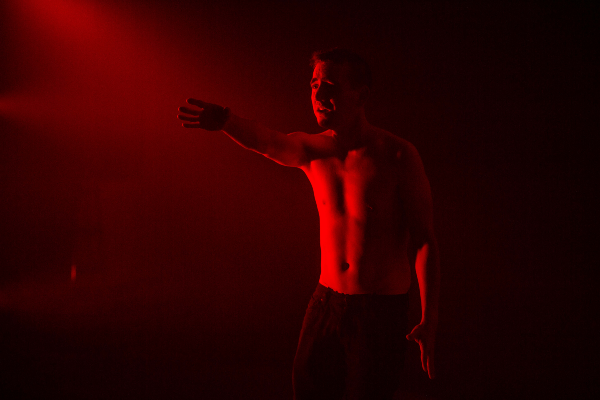 “ Tonight I did a very shitty thing”, Tyler tells us at the start of what turns out to be a shocking hour of totally gripping, intense theatre.

Tyler is a handsome man in his late 20’s and after a faltering period as a waiter in a Chinatown restaurant, he now seems to have found his true calling in life: as a Queer sex worker. Bouncy, frenetic and clearly hiding something horrendous, he tells us too: “ I’d like to make it known that I’m trying in London. I’m trying to be part of the buzz of the city, I want to tick the right boxes”.

A flashback takes him to the school changing room, at age 14, and his first realisation he is Gay- an encounter with Craig which leads to nothing but the realisation.

Fast forward to his new night job and he readily onfesses: “ I do it ‘cos I love it..and the money’s good too”. Along the way to what Tyler labels” the event”, we hear about James, the love of his life, Roger who doesn’t want sex but pays for “ the boyfriend experience”, but all roads in this narrative lead to the fabulously luxuriant Kensington penthouse- as Tyler describes it: “ I’m in the living room of wealth”.

But he and the filthy rich punter are not alone: there’s a much younger boy – possibly not even legal- and a camera whirring away in the corner of the room. A highly physical encounter has an apparently traumatic, violent and tragic outcome, and the appearance of the bleach of the title which Tyler uses to get the copious amounts of blood out of his expensive designer underpants when he’s back home.

Agonising silence in the news and no contact leads Tyler to question if “ the event” actually happened at all. But when he finds the scene on a camera and loads it to the dark web, the results are truly shocking. The only way of validation is to go back to the penthouse, and in the final scene of the play there is a stunning coup de theatre that turns the whole story on its head.

Ireland-Reeves is absolutely stunning as the troubled man, pulling us into the story at every turn and being totally believable as his life unwinds and plummets.

When theatres were allowed to open last summer, Lambco Productions had an exciting  season at the Garden Theatre at the Eagle pub in Vauxhall. Now this season, at the pop-up venue of St Garbriel’s Halls, Pimlico has cemented them as ground-breaking and innovative theatre-makers.

Bleach plays on 10 and 11 August. Tickets for the rest of the season at gardentheatre.co.uk