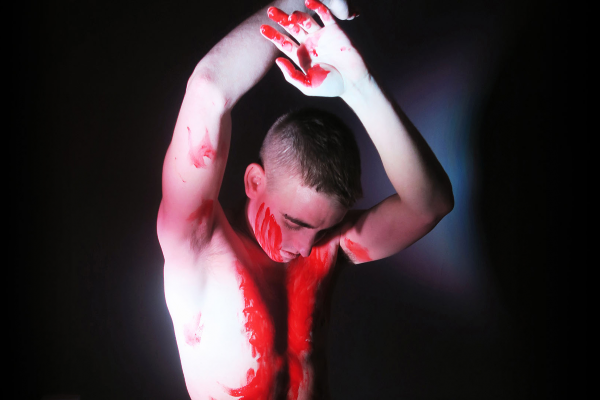 I rarely re-visit shows quickly but I was so bowled over by Dan Ireland-Reeves’ solo show Bleach in London recently that I just had to see it again – this time at the wonderful space at the Ironworks in Brighton. Boy, was it the right thing to do!

From his opening remark to us that he’s done “a shitty thing”, to the 60-minute play’s staggering finale , this is a class act on all levels. Tyler is an unabashed sex worker, selling his body all over London and proud of it, because as he tells us: he’s good at it.

His mother thinks he’s still waiting tables in Chinatown, and he wryly confesses to us: “ my work in hospitality may have become a little misguided”. Such cute and acute phrases abound in Dan’s writing, and we really care about the guy whose life has been turned upside down by what he calls “the event”.

Without giving away too much, the incident, which he later doubts happened, involves a dreadful tragic outcome. The great skill of the piece and of Dan’s gripping performance is to carry us with it, through its own morality and Dan does this with subtle and frequent changes of pace, movement and emotion. It’s difficult to think how this could be acted better.

His sexual activity he describes graphically but there’s also a punter to whom he gives “ the boyfriend experience” or as he calls it “a non-sexual transaction”. And there’s a boyfriend in tow too , with whom he seems genuinely in love. So what Dan is posing for us is why people do the things they do, when they don’t need to, and why we shouldn’t judge them.

It’s a stunning piece of thoughtful theatre, and Dan told me before the show he hopes to take it to the USA. I hope he also keeps giving UK audiences a chance to see a rare piece of writing and acting.

Remember Dan’s name – we’ll hear it again I feel sure.

Footnote about the Ironworks. It’s a great space, tucked away behind Brighton station,  but with a 100-seat auditorium they need more than 6 seats in the foyer/bar area