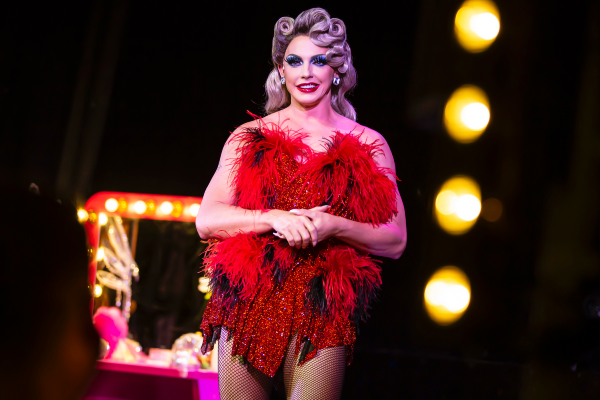 If there isn’t enough glitz and glamour in your post lockdown life, then you need a dose of Alyssa.

She’ s a specially made-up potion of fun, sass, downright rudeness and amazing dancing talent. The shy boy from Mesquite , Texas – Justin Johnson – has grown into this extravagant, outrageous showgirl that is taking a small corner of the West End by storm .

Alyssa rocketed to fame in Season 5 of Ru Paul’s Drag Race and was brought back for its All Stars spin-off.  On the  back of that, as he puts it “ they slid a cheque under my door, and he became the subject of a documentary series on Netflix – Dancing Queen – about his Mesquite dance studio .

As he tells his cheering, whooping and clapping followers at the Vaudeville Theatre  : “ there’s no script: I’m the script”. And for two hours he tells his life story and in Act 2 gives us all the dirty low-down on Drag Race. If you’re a devoted Drag Race fan you will get 100 per cent of the asides, quips and acid remarks . I’m not so I didn’t.

What I did get was that Justin is an utter professional perfectionist in how he looks, moves and enthrals his audience, cocooning them in his undoubted 5-star talent.

When he turns to dancing, with his agile male quartet of dancing boys, he is at once athletic and balletic – it’s a mesmerising thing to watch and marvel at.

What Alyssa has done is brought a touch of Vegas to the Vaudeville, and I for one am very grateful.

Until Sunday 13th June.  More info or too book here: