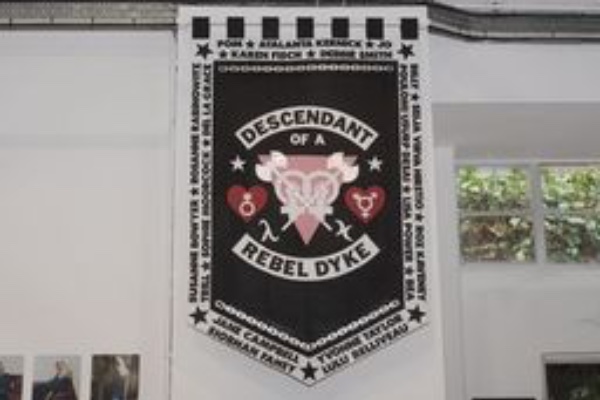 Jaq Bayles visits the stunning Rebel Dykes Art & Archive Show, and looks back at the Lesbian Avengers as their famous handbook is re-released with bonus content.

Rebel Dykes, Lesbian Avengers – the activists from the ‘80s and ‘90s with major attitude are back. The fact that an important new art show and the release of an updated edition of the original Homemade Revolution Guide have coincided seems fitting in light of the LGBTQ+ community’s current political mood.

Certainly, the Rebel Dykes Art & Archive Show at Space Station 65 in London’s Kennington fuses a celebration of the achievements of the original Rebel Dykes with work by younger generations who “join them in continuing to disrupt the world today”.

Clearly, the spirit of rebellion is rising once more to confront the fact that misogyny and homophobia continue in the UK, despite the positive achievements of recent decades, and that spirit has resulted in a joyous, evocative collection of photographs, artworks and recordings that unite underrepresented cultural histories of four decades ago with contemporary dyke culture.

For anyone who remembers the 1980s, this exhibition, which is “rooted in the stories of the Rebel Dykes, featured in the recently premiered documentary, who met through Greenham Common peace camps and squatting together in Brixton in the 1980s” – will also surely reignite some sparks of anger while reminding them just how active the Rebel Dykes were in fighting for their freedoms.

Siobhan Fahey, a director of Rebel Dykes History Project CIC and the producer of Rebel Dykes, the movie, started the archiving process in 2014, calling out for articles, artwork, books etc from the period.

In the press release for the exhibition, she says: “It is the intergenerational aspect of this exhibition that excites me most. Over recent years there seems to have been a host of misunderstandings and distrust between different generations of queers and dykes. This is at a time when we need to work together more than ever to ensure we don’t lose what older queers fought for. Younger queers need powerful, helpful role models and mentors, and older queers need to know that their earlier struggles are appreciated and that we will be remembered and cared for as we age.

“By holding this powerful creative conversation between generations, exploring each other’s art and influences, we are hoping to help heal our painful rifts and are aiming to build future community.”

“When the film Pride (2014) came out, it told our story from the 1980s but really downplayed the lesbian role, so I think one of the initial things was that it was a bit of a response to that,” she says.

“I got some funding about a year ago from the Heritage Lottery Fund for the exhibition and then some private funding for the film [due for general release in the late autumn].

“The whole exhibition is based on archive. We asked the younger artists to respond to that archive so quite a few new works have been created for the exhibition. The aim of the whole project is intergenerational debate and community, so it was important for us to have two curators, one from the older Rebel Dykes community [Atalanta Kernick] and a younger curator, so we were working with Kat Hudson who runs a magazine called Lesley and is very in touch with younger artists.”

Looking at the broad and varied collection displayed in the gallery, it’s hard to understand why such works have not previously attracted more attention – there is everything from the wit of Jill Posener’s photographs of graffiti defaced posters, to never-before-exhibited works by Del LaGrace Volcano, to Eleanor Louise West’s fascinating Greenham Common Quilt.

“I think one of the reasons why our art is being ignored is because of the self-esteem or confidence of the artists themselves – some of the artists were really shocked and surprised when we approached them to be included in the exhibition. Dixie Thomas’ work is amazing – it’s a triangular wall of black & white photos and they haven’t done anything with them for 30 years until they were asked. I think we hold ourselves back sometimes in not realising our own worth, our own art.”

And there’s another very important reason this exhibition needs to be shown, says Siobhan:

“We are ageing and dying, so we have to capture these images and stories now, while there’s still chance.

“I think present-day life is really tough, there’s a big interest in the past and nostalgia and golden eras. Although we had all the homophobia and that sort of stuff, which was difficult – we were certainly very ostracised by our families and by society – but what we had instead was much tighter communities than young folk have today. Much more space – squats, bars, venues – to meet in real life and create in real life.”

She adds that it’s important to be understanding of the issues facing younger queer people today, such as the “terrible housing situation and the isolation that young queers feel today compared to the community we had”.

Indeed, “at some of our events I’ve had younger dykes crying because they are so moved and so upset because of their isolation. People feel they have no community. They might have an identity but in real life they don’t have a community so people have found it very moving to see the community in the past.”

Siobhan adds the project has seen friendships and a community being built up between younger and older lesbians, with elders being role models and mentors and younger people helping them to better understand today’s groups.

“A lot of language seems to have changed so fast and gender identity has changed so fast, and a lot of older queers find it quite confusing. The only way round that is for us to meet each other and talk, because we have much more in common. We may have used the word ‘androgynous’ instead of ‘non-binary’, but we certainly had the same concepts. We might not have thought about the whole pronoun thing, but I’m sure if we had we would have used it. There’s nothing new under the sun, there’s just different ways of explaining it.”

“Long before there was marriage equality, or out lesbians on TV, the Lesbian Avengers were in the streets fighting for the visibility and survival of lesbians worldwide. They ate fire to call attention to the fire-bombing deaths of a black lesbian and white gay man in Oregon, commandeered homophobic radio and TV stations, crisscrossed the US in Pride Rides, unleashed plagues of crickets on ungodly ministries, and marched en masse in cities including Washington DC, New Orleans, Vancouver, and London.”

This group of non-violent activists decided to pull together the talents of their collective to create a guide offering advice from journalists, artists and other influencers to help others wanting to form similar groups across the world.

Now their handbook has been released in a new edition, giving step-by-step instructions on organising a direct action group, including covering such topics as how to hold a meeting, create mind-blowing actions, attract press, and deal with cops.

The new edition also offers bonus material including essays on LACROP (Lesbian Avenger Civil Rights Organising Project) and additional pages of Avenger communiqués reporting on fire-eating demos, fear-defying zaps, and provocative kiss-ins. The handbook is now also being touted as a great resource for historians and scholars focused on media and social change.

Kelly Cogswell, of the Lesbian Avenger Documentary Project, says in the preface: “We release this new edition… as lesbian rights and liberation face renewed attacks. The bulk of this extraordinary resource is unchanged, though we’ve cleaned up typos, and acknowledged advances in technology for activists still using it today. We’ve also added important bonus material, including tips for demonstrating when civil rights are being trampled.”

Kelly adds: “The handbook has also become a kind of Lesbian Avenger history told in our own words, reminding us of how much we accomplished, and how much is still left to do in this world where lesbophobia, that cocktail of misogyny and homophobia, still reigns supreme.”

Produced by the Lesbian Avenger Documentary Project and distributed through Ingram books, it can be ordered from Amazon or local bookshops.