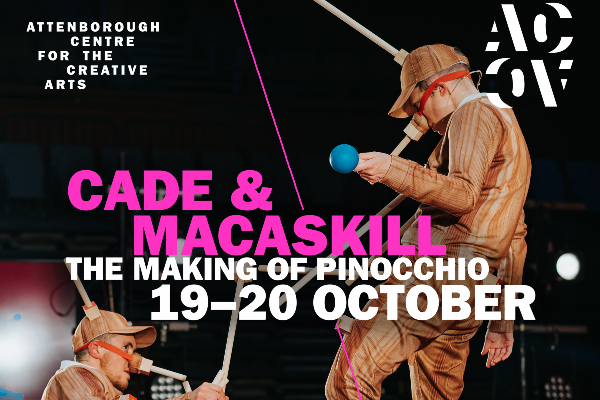 Rosana Cade and Ivor MacAskill are a unique performance and real-life partnership and you can catch them this week in Brighton.

Rosana grew up in Tring, Herts, and was a child performer, making their panto debut aged 6. After a year on an acting course, they realised they wanted to widen their horizons to performance art and so moved to Glasgow, taking an experimental theatre course.

Asked to differentiate performance art from “ straight” theatre, they told me:” theatre usually has defined roles – actors, directors, musicians, writers. In performance art we tend to combine all the roles, dismiss the so-called 4th wall with the audience and make more direct performances, and the form relates to the subject matter”.

Asked abut a comment they had made that Queerness was about rebellion and celebration, they said: “ It’s both and also about imagination. We ask what does being Queer mean?  It’s rebellion against repressive norms, it’s about gender and sexuality and celebrating that and imagining new ways things can be. We celebrate the under-celebrated in society”.

Rosana and Ivor have worked together for 10 years and been life-partners for slightly less. In 2018 Ivor started to explore their desire to transition. Rosana says:” we started to explore our own relationship alongside the work we make.” And from that came the slow gestation of their latest show The Making of Pinocchio.

Ivor had a similar performance history . “I played Mary in the school Nativity play but there were no lines! At 12 or 13 my mother put me in a local drama group to build my confidence a bit- which it did.” Ivor later took a performance-makers course at the famous Dartington College. “ We did quite experimental work and studied the dance and performance art of the 1960s. It was a melting pot of ideas. I formed a company and moved back to Glasgow. My love of performance connects deeply with my autobiography. I found out things about myself ”.

Ivor has developed work about Queerness and identity and taken it to young children in schools – not without controversy : the Daily Mail accused Ivor along with Nicola Sturgeon of corrupting school children! “ I didn’t see ideas about Queerness and gender reflected in dramatic work for a children’s audience. There were no Queer characters in this world of drama. It’s a difficult area and there are views that this is not a fit subject matter for the young.”

I was interested in asking Ivor about his Trans journey, which is a central theme in their Pinocchio show. “I’m 42 – I worked it out very early but also very late. When I was 2 or 3 I was called a tomboy – there was a masculinity that I recognised in me. I grew up as a masculine woman. Maybe the Lesbian identity fitted me, I thought”.

“I realised that my sexual identity didn’t matter but also that I’d been repressing it for a long time. Rosana and I identified as Lesbians originally – that was our sexuality and we didn’t know how my transitioning would affect us – but it’s been a beautiful journey.”

Rosana added:” my sexuality now feels very fluid and now I see myself. We’re not 2 men; we’re not 2 women; and we’re not a man and a woman. It’s strange to move into that space. But an incredibly positive thing. When you find your Queer identity, it can be a big thing. Some people think we’re a heterosexual couple- it’s weird.”

Ivor explained about the Pinocchio story: “ he’s a liar. But there’s a connection  with lying and Transness in society’s eyes. Transphobia can create a sense of suspicion – the idea that Trans people are lying about who they really are. How does such a person live their truth? It’s a gentle, intimate, funny representation. We’e inviting you into a pretend film studio, where we are making our version of Pinocchio. There are lots of filmic tricks and you see behind the scenes. Tim Spooner, our designer has built a beautiful set, it has rich, red colours and wood is a big element for obvious reasons. There’s a big projection sceeen and it’s a magical experience- very romantic and it’s about what happens to a couple when people can be who they really are.”

I asked Rosana what advice they would give to a younger self.” I’d never met a Queer person when I was a teenager. I’d tell them to discover their Queerness. Keep doing what they love.”

Ivor agreed: “ keep doing what you love. Find people who are able to help you know yourself.” I was keen to ask their views on pronouns: Ivor told me: “ I’m he/him and they/them and Rosana is they/them. It’s a way of people trying to express themselves.”

And I’m sure theirs is a relationship without strings – like the puppet who became a real boy.

The Making Of Pinocchio is at the Attenborough Centre For The Performing Arts, Brighton on 19 and 20 October.

Tickets and information via this link : attenboroughcentre.com